Volkswagen Microbus Gets an Electric Revival 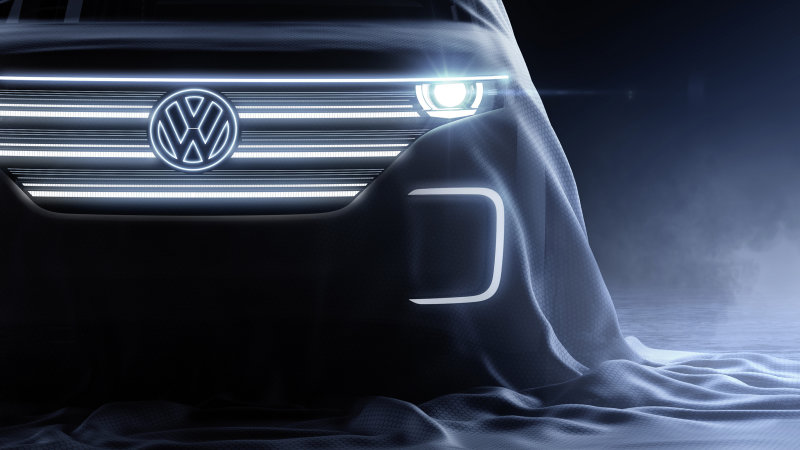 Volkswagen is set to reveal an all-electric concept car at the upcoming Consumer Electronics Show (CES). If the teaser image accompanying this article is any indication, that electric vehicle will indeed be a Microbus. Unfortunately, the teaser image is all we have to go on at the moment. But that doesn’t mean we can’t indulge in a bit of informed speculation. Judging from the teaser, the vehicle front end popping out from underneath the drop cloth looks to be boxier and the headlights more truncated. Jason Torchinsky of Jalopnik points out that the front end doesn’t exactly resemble the classic VW Microbus, but that could just be a concession to sleekly modern styling conventions. Back in early November, we speculated on the possibility of Volkswagen producing an all-electric Microbus as a panacea to the company’s emissions test-cheating scandal. If you read between the lines of that piece, you could have heard the pleas for such a vehicle to exist. Apparently those pleas were heard by the auto gods —or more specifically, Dr. Herbert Diess, CEO of the Volkswagen Passenger Cars brand, who will deliver a keynote speech on electric mobility at the CES show. If the rumors are true, Volkswagen’s electric Microbus concept will go into production in 2017. In addition to electric, VW will apparently offer the Microbus in gasoline and, yes, diesel versions. While we don’t yet know the full extent of the automaker’s Microbus plans, we do know that those plans have been afoot for a while. Here’s what VW product development head Dr. Heinz-Jakob Neusser told Car and Driver back in April: “We are actually thinking about how we can take all of the advantages of MQB and put it into a Microbus genetic code…. First, the wide, solid D-pillar; second, the boxy design of the center section; and, thirdly, the front end must have a very short overhang—the distance from the A-pillar to the front end must be very short. Otherwise the hood is too long and it doesn't look like a Microbus.” In his remarks, Neusser referred to the Microbus as one of the pillars for the Volkswagen brand and detailed the engineering logistics of making it an electric vehicle. In addition to the Microbus, VW is expected to unveil its revamped classic camper van model as an electric vehicle, though it may not be at the upcoming CES. To us, reintroducing the Camper makes perfect sense—after all, if Neusser’s thinking about other iconic models from the automaker’s past, his attentions would’ve had to inevitably turn there. Las Vegas will be the site of CES 2016, which runs from January 6-9. A full schedule of events can be found at the CES website. Auto Publishers will be sure to fill you in about all the cool concepts and electric vehicles at that show in 2016!