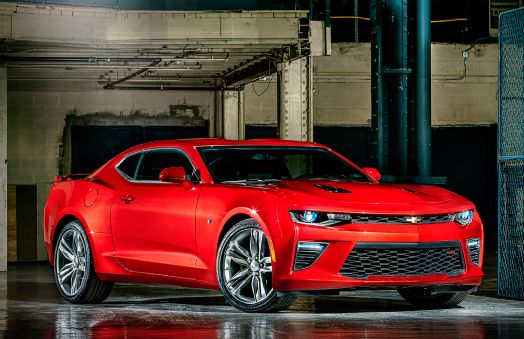 Belle Isle got hit with some big waves yesterday. So large were these waves that a few 2016 Chevrolet Camaros washed up and appeared in all their glory for the first time. After all the teasing, Chevrolet finally called together a group of Camaro fans to pass the torch from fifth to sixth generation; sans formal Auto Show. What seems to have occurred is that the new 2016 Chevrolet Camaro was not ready for the spotlight for the North American International Auto Show in late January. In General Motor’s defense, there are some big tires to fill after the fifth gen outsold the Mustang for the first time ever; if it can top its 6th gen rival the wait will have been well worth it. Preceding the unveiling was a strung out series of selective body shots. These pictures did not show the new Chevy outright, just a few glamour shots, e.g. the prominent new roof ridge, the pretty posterior, and other mechanical components. Despite calculated secrecy, the bomb was dropped a little premature as there was ‘leak’ before the weekend unveiling event. The ‘leak’ could easily be another preplanned peek, it was a just a screen capture of a CNBC broadcast. Sooo… yea, not like a masked aficionado broke into GM HQ armed with a camera and a mission. Cartoon-ish mental image aside, the new 2016 Chevrolet Camaro is stunning; to prove it, what I’ll do instead of fighting for original content is mention that Camaro6 has great coverage of the May 16th premiere. While the styling is very important (this humble observer ranks the 2016 much higher on the aesthetic spectrum than its older brother (the 2015 rear lights irk me)) it is by no means the biggest improvement. If the press releases and group of Camaro Connoisseurs are to be trusted in objectivity the 2016 Camaro is better in every way. The designers started with a crash diet allegedly yielding 200-300 pounds of weight loss depending on trim level, the biggest factor being the bones bearing the brunt of horses escaping the tailpipe. The new model starts with the GM’s Alpha Platform which is about 100 pounds less than the Zeta Platform (or Global Rear Wheel Drive Architecture) used in the 5th Gen. Better yet the overall result is stiffer so the handling has been updated to rival its track ready rival. The SS even has Magneride. The switch to Alpha also resulted in a smaller end product; smaller on the outside, but bigger on the inside. The designers played a game of inches and came out on top. Though I am not sure what to use as a base for dimension estimations, because the 2015 2SS I recently test drove had comfortable legroom in the back. There was enough room for me to fit in the back if I were the driver (I drive pretty far back despite my under 6 foot stature). However I also drove a baseline 2012 and the rear leg room was somewhere between abysmal and non existent (it should be mentioned my only real complaint). Visibility is a common issue associated with the current Camaro, but I don't think it is so bad for a sports coupe (you want to talk about impaired visibility drive the FRS or BRZ). Regardless, the 2016 is supposed to have much better visibility. The 5th gen had a hate it or love it interior, either you loved unique concept-like styling… or you just didn’t. This model isn’t quite so polarizing, with supple new materials and what appears to be heated and cooled seats (not even the 2015 2SS has both). Undeniably refined in many ways the interior is still far from conservative. The dash has a new 8 inch center console screen and a customizable screen between the tach and speedo which replaces the fighter pilot-esque gauges in front of the gear lever. Occupying the newly freed space are two clever circular analog air vents controlling air temperature, and two buttons that adjust between turtle whistle and typhoon air speeds. Hopefully that vent placement won’t be two awkward with the gear lever adjacent. Instead inspiring a return to driving gloves, because that is a formula for a frozen shifting hand. On the topic of shifting (which everyone should be doing in a Camaro), the cup holders are said to be convenient for those planning on both having a forearm and hydrating (thus far this is the most my common complaint for designers). The cabin also has ambient lighting in every color of the rainbow. Taking advantage of that fact, Chevy added an 'auto show' mode which cycles through the whole spectrum, presumably to make up for the auto show they missed. When it comes to a car like this most of its soul comes from the engine (though that Alpha Architecture has a part in the puzzle). Now I could go into marvelous detail about every little thing that is special about the three new engines, but that will be for another issue. Instead what you need to know is that the base model 2016 Camaro will be fitted with a turbocharged four cylinder engine. It should be mentioned that the Camaro will have less ponies than the Mustang’s similar I4 ecoboost (275 and 310 respectively). But the I4 ecoboost is not the base Mustang, I think this will be a crucial point for the Chevrolet. If a driver is worried about gas milage they are probably looking for a more economical car overall (cheaper) and the I4 is minimum a thousand more than the base V6. It should be interesting how the 6th gen rivalry evolves Ford is not likely to take its loss in the 5th generation sitting down. What the future holds for the all-new 2016 Chevrolet Camaro is still in the air, but what is sure is that it deserves its prestigious badge.