2016 Honda Civic Does Not Mess About 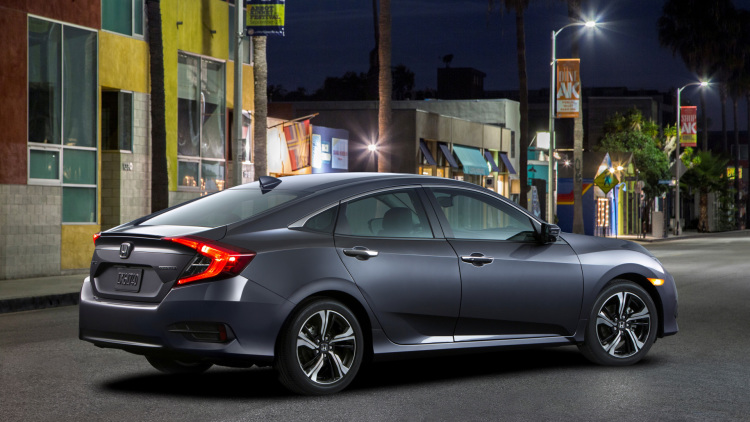 Technically, Honda has produced the best Civic ever. It far supersedes its previous iteration in every aspect, it is even up for car of the year awards for multiple publications, Beyond that, it seems to be attempting to redefine its own segment (compact sedans). The 2016 Honda Civic, is aiming for the stratosphere; it does not mess about trying to out-scrimp its bare-boned competition, instead it plans to eclipse them all. Immediately apparent is the exterior… it is more provocative than any other model. The front lights are aggressively sharp, and accented by LEDs in a somehow tasteful way. The back end was clearly inspired by an emulator of Ian Callum. The car is longer and wider giving it a slimmer appearance (more like a supercar (NSX-ish one might call it)). Some might assume that every contemporary model is the most visually appealing; unfortunately that is not true. There are many instances of this phenomena. Look at American Muscle cars, for the most part they all peaked in 1970s. After that they all started steadily descending into disfigurement, in that regard: peaking in the 80s and early 90s. In fact, most cars that thrived before the 80s merely survived or died in that decade. I am not someone who doesn’t understand; beauty is both subjective and voguish, but come on… a curb on curves and terrible build quality. It got to a point where many sedans were barely distinguishable from one another. This is not to say that every car of the 1980s was unsightly. The Ferrari 288 GTO, and most of the decades Porsches (namely the 911) which was a Supernova and consistently gorgeous (sequentially speaking). However, those are rarities, like Gia Carangi (supermodel (sans tragedy)) and Jaclyn Smith (respective to the previous analogy). Prior mess of a digression notwithstanding, the 2016 Honda Civic does deserve much praise, it is the most outstanding generation in just about every way. Aesthetics aside (again they are abstract), Honda cranked everything up to 11 (though you might have a problem doing that with the touchscreen volume). Somehow, the Civic is both faster and more fuel efficient. Thus far, there are two Earth Dreams™ engine offerings. But that will soon change, as Honda will introduce both an SI and Type R in the near future. Gotta compete with the Golf: GTI and R somehow. The naturally aspirated, baseline 2 liter supplies 158 horsepower and 138 foot pounds of torque, while still averaging 35 miles to the gallon. According to the EPA tests, the manual transmission gets a lower gas mileage than the Continuously Variable Transmission (CVT). However, I assume that is due to the idea of an ‘optimal shift’ being half of the redline; even though a prudent manual driver could easily keep the Revolutions per Minute (RPMs) at just about two thousand without doing damage. The premium 1.5 liter turbocharged engine produces even more power while; remarkably; maintaining the same mileage. The engine produces 174 horses and almost as much torque (162 foot pounds for the curious). Unfortunately, the trims with this engine will not feature a manual transmission. Which I know does not bother the majority, but what can I say. I like being responsible for all my actions on the road. Even traction control is disabled for the most part, but I am not that guy. Most people would never even notice, it unless I say… then maybe something cool… while still being safe, which is exactly what the 2016 Honda Civic is… though, that is not unique to this generation. The frame has been strengthened (further) which improves the handling, while allowing for better distribution of force. The airbags have advanced technology; SmartVent® to be exact. That however, is only the beginning of safety tech. All Civics will come littered with cameras as standard, with optional Honda Sensing™ and autonomous driving features. The technology continues to amaze with both Android Auto™ and Apple CarPlay®, but only for those who splurge a little on trim (EX and up). Other than aforementioned trademarked technology and the hitherto unmentioned Touchscreen display, all of the high tech comes as standard. Critics have complained about the 2016 Honda Civic being so perfect that it is boring. I feel like the detractors were sitting in a room thinking; “it does everything well, but it has to be messed up somehow… that’s it… It is too good.” That is silly reasoning, but the car does have an issue or two. The touchscreen audio controls on the EX and higher trims are very touchy, the USB port is not very ergonomic considering the placement of the gear lever, and as I said about the 2015 SI; those polarizing rims.