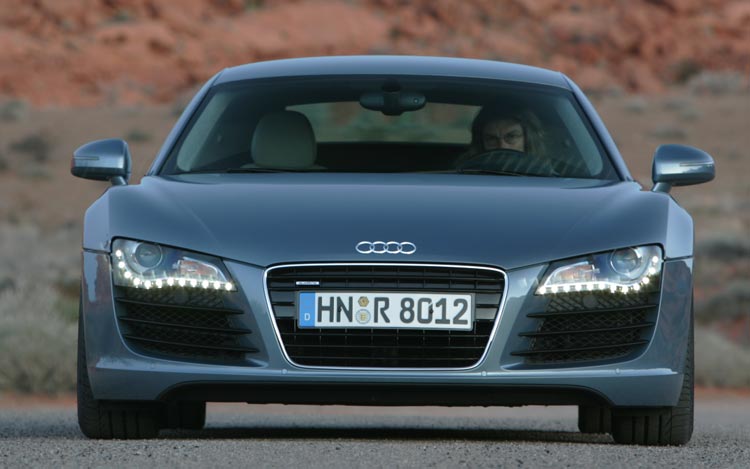 The Audi R8 debuted in 2007, when it did it revolutionized the entire brand. Before then people saw the Bavarian based Automaker (no, not Bavarian Motor Works) as an afterthought, especially after the other Bavarian company (this time I do mean BMW). People thought: well we’ve seen BMWs, Jags, Mercedi, Lexi, Acuras, Cadillacs and nothing has struck our attention… maybe we should swing by Audi. Post mascara light Audi is a totally different upper echelon animal. Every model they make (other than the A4 and TT) is top 4 in their category, many of them actually lead their class. The model that started it all, the Audi R8, is hitting the gym, dieting, and getting a face-lift; to add plus one to its grace and race stats. Last week, the German auto manufacturer, released the official information for the new generation of their brand catalyst. It detailed all the additions to the latest edition of their flagship Premium Sports Car. However, this R8; more so than the first generation; should be seen as an almost-race-car. The reason being: it was actually designed alongside Audi’s actual race car, the R8 LMS. Which, has won more 24 hours of Le Mans races than any other automaker since 2000 (13 times). Granted Audi is one of the few automakers that still partake in Motorsport. After 1999 most deemed the cost too great and retired. All the variations use ASFs (Audi Space Frames), which blends Aluminum with CFRP (Carbon Fiber Reinforced Polymers) to create a super light and super strong frame. As a result, the ASF weighs less than 450 pounds, and with all aluminum paneling; the sports coupe weighs just a smidge more than 3200 pounds (dry). The V10 in the road going version has also been reworked to boost efficiency (MPG) while producing more power (BHP). The base 5.2 liter V10 will produce 540 bhp and 398 foot pounds of torque. The Audi R8 V10 plus, will bring more race than grace, with 610 and 413 respectively. That top tier combination will take the car up 205 mph and from 0-60 in 3.2 seconds. The compact engine lowers the center of gravity with its mounting position. Which helps in the bends. The old Quattro drive was scrapped, and the system was completely reworked from scratch, yielding what is apparently the easiest super car to drive on the market. The torque vectoring is second to none. The temperature regulated multi-plate clutch; minimizes slip in the front; while the mechanical rear differential is assisted by the fact that the engine is almost dead center above it, creating a beautiful 42:58 weight distribution. Audi says; together they “essentially eliminate understeer.” I am sure the chassis helps that effort. The new R8 will come standard with electromechanical rack power steering (as opposed to hydraulic) which will boost efficiency compared to the old system. However, one can switch that for dynamic steering, which will alter steering stiffness depending on speed. The faster you drive the heavier the steering feels, unless you opt for the performance package. Which keeps a 13:1 fixed ratio, until reaching the curve limit where the system starts counter steering in microscopic bursts for superlative stability. The Ceramic brakes, large tires, and magnetic ride make sure that the race goes just as smooth as the ride. The Audi drive select system adjusts the brakes and magnetic ride for the situation; be it driving over ice or a track day. The Dynamic mode makes busting a tailslide just as easy as hitting the apex. The previous model was considered the super car easiest to live with. Compared to its competition; the premium Bavarian sports car was cheaper, more gas efficient, more comfortable, and easier to drive. If the new one is just as spectacular as its older brother, there will be no compromise when buying this dream car. Neither grace nor race will be sacrificed in the Audi R8, just relentless fun from a daily driver.