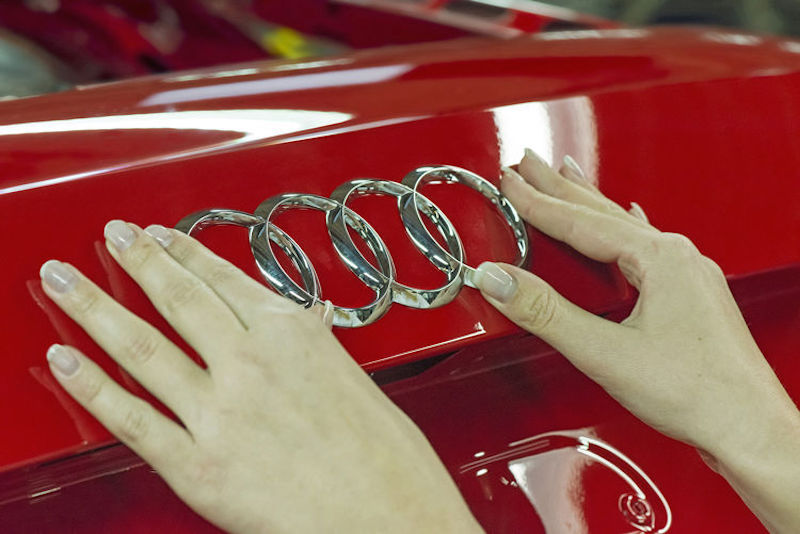 There will probably come a day in the not-too-distant future where we’ll view combustion engine powered vehicles as archaic a mode of transportation as the car that the Flintstones used to tool around in. (Talk about your faulty braking systems!) For now, C02-belching cars dominate the American auto industry due to people’s strong attachment to them, along with a dearth of viable alternatives. But it’s inevitable that electric battery powered vehicles will become ubiquitous on U.S. roads—and when that day finally comes, Audi and Tesla plan on being on the forefront of the electric vehicle revolution. First, let’s turn to Audi. The automaker announced that it’s developing a new electric battery powered SUV for the European market that uses cell modules from LG Chem and Samsung SDI. The two South Korean tech companies are among the world’s leading producers of the lithium-ion batteries that power our cell phones and laptops—and soon, they hope, all of our automobiles as well. They will supply Audi with batteries produced at their European production plants as well as invest in cell technology in Europe before (presumably) moving production to the U.S. Audi’s electric battery vehicle, which has tentatively been titled the Audi Q6 e-tron, will apparently have a driving range of over 310 miles. However, that range figure should probably be taken with an industrial-sized grain of salt: the Q6 prototype has yet to be road tested and until it is there’s every reason to assume that a 310-mile range is at best an optimistic estimate. Audi and its partners have kept further details about the electric SUV project, such as production timelines and financial investments, under wraps for now. At this point, we don’t even know what the vehicle looks like. Expect more to be revealed about the Audi’s Q6 when the electric battery powered prototype is showcased at the Frankfurt Motor Show in September before it arrives in dealerships sometime in 2018. What we do know, however, is that Audi’s long-term electric vehicle lineup plans are ambitious. According to preliminary reports, Audi will produce several new EVs over the next five years with the goal to position itself as an automaker that, according to Audi chairman Rupert Stadler, “will raise electric mobility to a new level.” The automaker’s ultimate goal is to provide consumers with more electric vehicle options in the near-to-distant future. Its short-term goal appears considerably more attainable: challenge the Tesla Model X for supremacy in the EV market. Speaking of the long awaited and incessantly delayed Model X, it may finally be more than a prototype collecting dust at Tesla HQ in Fremont, CA. The crossover SUV was recently spotted tooling around in nearby San Jose, thereby giving further credence to Elon Musk’s recent promises of a Model X unveiling in September. Unfortunately, it’s hard not to be skeptical of this latest announcement as Tesla has a history of overpromising and under-delivering. Already spies within Tesla are murmuring that volume production of the electric battery Model X vehicle may be delayed to the end of the year, or possibly even the beginning of 2016, due to lack of necessary vehicle components. Like the Audi Q6, the Tesla Model X will run on lithium-ion batteries whose production will be overseen by Panasonic at Tesla’s Gigafactory in Nevada. Incidentally, Audi previously partnered with Japanese electronics companies Sanyo and Panasonic to produce battery cells for its e-tron line of plug-in hybrid vehicles. For more on future developments in the battle between Audi and Tesla, be sure to visit AutoPublishers.com, your source for all things automotive!