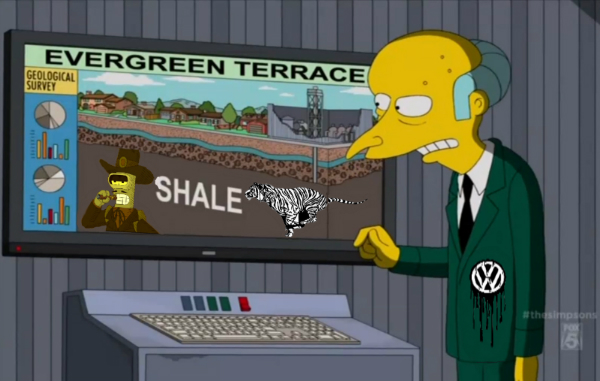 Lately, the most discussed Public Relations disaster has been Volkswagen Auto Group’s (VW AG) diesel debacle, however Exxon Mobil (who is no stranger to scandal themselves) may have gotten themselves hotter water (yes, that is a joke about frack filled tap water (too soon?)) than even they are used to. They are being accused of lying to the Attorney General, and possibly funding fraudulent information regarding Climate Change over the years. Like VW AG, the reason Exxon Mobil is now facing prosecution is because it is said to have explicitly lied, if found guilty, the whole Oil and Gas sector may face an 11 digit fine like the Tobacco industry did. However, those zeniths are highly unlikely for Exxon alone. The Tobacco industry received such a severe mulct, because it was deemed directly responsible for peer reviewed propaganda pieces parading as scientific studies, while also suppressing the opposition. Not only was the palpable perniciousness a point of influence on the case but also time span. The dishonest studies brought up against the industry as evidence dated back to the 1950s and 60s. Unlike Tobacco, Exxon Mobil, VW AG and many others in both sectors have in part financed studies published on the threats their industry poses to the public at large. Their deception lies in hiding their hypocrisy. VW AG was publicly tirading dirty diesel pollution, while they themselves were the worst of the polluters. In the defense of their executives, it is feasible that they were oblivious to the Martin Winterkorn wrath fearing Engineers’ who decided to avoid becoming victim of it by veiling their flaws. Regardless, the company as a whole fears the looming levy. It is said that the reparations may reach $18.2 Billion. And they deserve every penny levied… but not more than Exxon Mobil Shell, or BP. It is not unfeasible to think that there is some bias in these debates. Purveyors of petroleum have had their share of inexcusable operations in the past. But the world (America) loves gasoline. Therefore the punishments they have faced have been relatively minor (BP is facing $20 Billion but what they did was 20 times worse than VW AG) because Gas and Cash make the world go round. Vilifying diesel specifically is easier to justify (and has less opposition), so VW AG is being made example of. However, it might not be biased. Maybe the system is not based on aggregate evil… maybe the public just hates a liar. That would make some sense of the corresponding consequences. Exxon Mobil and BP did not lie so much as they downplayed the anticipated effects of their actions. Their crime is in not voraciously vilifying their own industry. VW AG on the other hand was simply a fantastic fabulist… but not more so than the Tobacco trade who actively funded slanderous science, yet the respective fine for VW AG is heavier. The Tobacco Lobby is still strong compared to the diesel support stable, which is existent at best. Superficially, Exxon Mobil does not seem to be in too precarious a position; similar scandals with VW AG, and the Tobacco industry exposé in 2006 have had much more inherent implications. The oil company under far less scrutiny, their crimes are those of under reactions, and a lack of emphasis. The other two actively misled the populace, one more so than the other.