Goodyear Makes Tires no One Will Ever Use 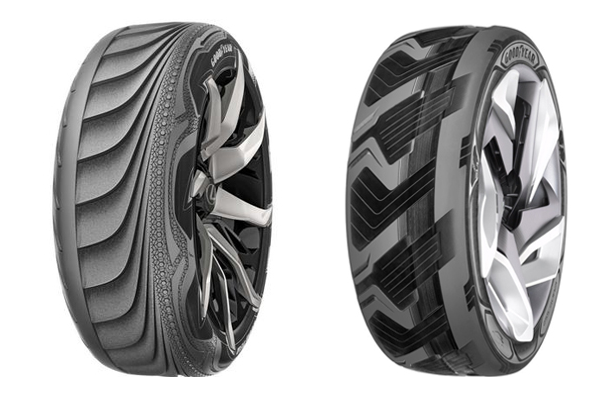 When someone thinks of ludicrous automotive designers, most people would probably think of BMW, Toyota (Lexus), or probably something French, but I do not suppose they would think of Goodyear… but maybe they should. In a spur of interest sparked by a picture of a some concept tires; I followed the curiosity further, and deeper into wonderland. After finding my way home from the land of obscure automotive one-off history, I had a question: what are the most radical designs (or ideas) tire manufacturers have made (or at least showcased), and are any feasible? Only one of the two concept tires made by Goodyear, will probably ever be used on a production car. The tire that started it all was showcased in Geneva a few months ago. Goodyear premiered 2 new tires designed for different purposes. The tires themselves had tread like one might find on the soles of their shoes, or a pattern on bad modern art. The first had a weird name like it was just off a production number. The intent was much more interesting than the name. BHO3 was designed to recycle heat and motion from the tires themselves and transfer them back into the car via electricity. The way the ultra black silica textured tire works, is that it is covered by a piezoelectric net. The net turns heat gathered from: the ultra-blackness, tread, and vibrations from the motion of the wheel; into electricity. The net also has the benefit of extra structural rigidity, so one could drive quite a distance with a punctured tire. Theoretically, the tires could work… maybe. However, no one will ever make these Goodyear concept tires, because they use so much expensive technology for so little electricity recycled. The issue is transferring the electricity back into car. Auto news sites speculated that there would be lots of tangled wires around the axle. The way I picture the transfer of electricity, is by making a basic generator. The Net transfers its electricity into wires, those wires could run through a little slit that in an admittedly not-cost-effective extra magnetic axle. The magnetic axle is fixed while the wires and normal axle move along inside, creating a charge and taking it back into the car. The problem is the axle would be ludicrously heavy beyond expensive. It would basically be a normal axle, surrounded by wires rotating with the wheels, and encapsulated by an extra stagnant magnet axle. Not very efficient in terms of weight and price, but it might recycle some electricity. The other tire that Goodyear debuted was the Triple Tube. This is more likely to find its way on to an actual production model. These are designed to adapt to the environment and/or different objectives. As the name suggests, below the outrageous tread are 3 inner tubes. These tubes can be electronically inflated and deflated for 3 intended (thus far) purposes. First and foremost, the tubes fully inflate themselves for the least roll resistance and highest efficiency, in eco mode. Some people like to test the limits of their tires from time to time, so the tires also have a sport mode. Sport mode maximizes contact with the road by deflating the tires slightly. In dangerous rainy situations, the center tube over inflates compared to the outer tubes, in order to maximize wheel diameter and minimize the ability to hydroplane. While no one at Goodyear has any intentions to ever make these intriguing tires, they (and other concepts) will continue to be used to showcase what the company is capable of. Just like automakers do, except more people got to drool over the GT90 than will ever see these tires. Goodyear, will however continue to use the silica that made its way on to the BHO3 concept... so that’s something.