Hyundai of the Future 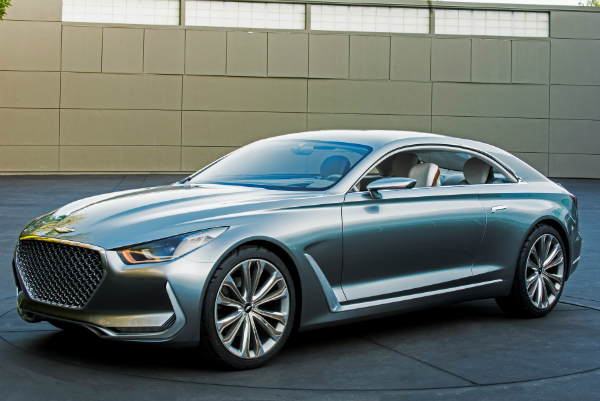 Hyundai is typically seen as a minimalistic car brand. That is by no means an insult, I used to love my Elantra. Ten years old at the time but still did everything I could from a car… albeit with the help of a handy dandy cassette converter. It shifted gears, played my music had cruise control and was capable of over 30 to the gallon if I drove conservatively. Recently, to try to shed the aura of a simple car they have entered the luxury auto category. Today, Hyundai waded deeper into the waters of luxury, showing off their futuristic new concept car, the Vision G. For the initial presentation, the company chose the Los Angeles County Museum of Art. They are trying to ever so subtly beat in the notion that the Vision G is to be seen as a work of art. Then on Sunday they will be showing the car at the Concours d’Elegance, which is an annual charity auto show at Pebble Beach that is only for showcasing “the most beautiful and rare” cars. It is doubtful that Korean Company will make anything that looks like Vision G, so in that regard it is artistic in its exclusivity. The Vision G is supposed to evoke the idea of chivalry; that it needn't call attention to itself, instead it subtly demands it. Which, admittedly, could be true if it was only judged on a spectrum only including concept cars, but in the real world this car induces thoughts of chivalry the way Craig Sager’s suits do (that is one flamboyant gentleman under there). The interior is by far the most ostentatious part of the car, and also why it is so easy to dismiss as a concept only as opposed to a preview model. The seats and steering wheel perfectly preview the uncharacteristic conspicuousness of the concept. The interior is predominantly a cream or eggshell white; the seats have a high contrast cross stitch pattern and feature a wooden lining accenting around the headrest. The steering wheel has the same color leather, with a stark metallic contrast throughout. Every speaker is highlighted with patterned perforations. However, it is likely that this is just a fancy body on what will be a more mass market friendly version of this car. I am sure the future production model of Hyundai’s concept will be a true gentleman. Personally, I hope that they just drop in the meaty 5 liter award winning V6 Tau engine into what looks very similar if not identical to the current Genesis Coupe. The R-spec is a perfect specimen of exactly what I want from a car. Mechanically, it is fantastic. It does everything a car has to do as good or better than its competition for far less capital. It is a minimalist sports car, just plays the music you want, while allowing you to do anything you want in the rear wheel drive mobile fun house. Thus far, the key takeaways from the Concept coupe are; the fact that the new Genesis Coupe will feature a 420 horsepower and 383 foot pounds of torque in the R-spec package. And that the future of premium products made by a Hyundai, are envisioned to look something like the Vision G. The Vision G also had a Virtual Valet Door System to open (and presumably close) the door for those that ride in it. It is not the first concept car to ever to do that, but if it reaches the Genesis, it would be the first production car with that feature.