Hyundai Is Still Deciding on the Santa Cruz 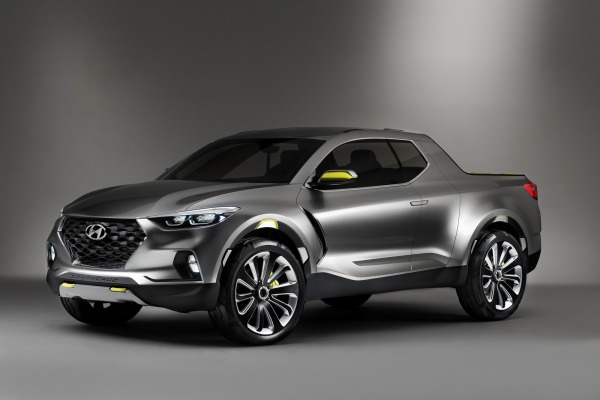 The week of Concours d’Elegance Hyundai premiered a new concept, the Vision G. The Vision G seems to be a true concept, as opposed to the preview of a future model. Though, that is not to say that the Vision G is a total one off piece of art, despite the more or less blatant implication that it might be. The Vision G was unveiled at the Los Angeles County Museum of Art, but still, some features should be making their way onto production models sooner or later. If nothing else, it should be a precursor to a brand break-off in the Korean Company. However, while the interest instigated by the Vision G was fairly limited; the Hyundai Santa Cruz is still generating intrigue in over 6 months after its initial presentation. The Santa Cruz was shown to spectators at the Detroit Auto Show this January. The concept car not only stole the show at that auto show, but all of the others here in the US thus far this year. So highly received was the Santa Cruz, that earlier this month it was named the Concept Truck of the Year by NACVOTY (North American Concept Vehicle of the Year) at their 14th annual award show. The Hyundai Santa Cruz is automaker's first attempt at making a pickup truck. In tune with the simplistic nature (that is a compliment by the way) of the Korean Brand, their truck was based off their larger (while still relatively small) Santa Fe (as the name implies). While the Korean automaker is doing quite well for itself, it does not have enough capital to research and develop an all new platform for what was supposed to only be a concept. Therefore, it is much more pragmatic for the company to borrow an existing platform to materialize an exercise of imagination. However, since the debut, the surrounding enthusiasm was never curbed. Apparently, the truck was a home run with Millennials. Like the Millennials themselves, the Santa Cruz has a unique new breed of style. In fact, it is the first of its kind, as the Santa Cruz is considered a “crossover truck.” Again, the base is that of a Santa Fe, which could be a: midsize; compact; SUV, or a crossover; depending on who is asked. On their website, however, it falls under the crossover nomenclature. The crossover base, would make the Santa Cruz the smallest truck in the American market. That is, after the Ford Ranger, which should be making its way back to production fairly soon. Because of its size, style, and short truck bed (that according to a manager at a local Hyundai dealership and Car and Driver has a power extension option), the concept is much more versatile and practical than a typical one. The fact, that the crossover truck will likely be the first Korean car to run on diesel in the US makes the truck all the more appealing. At the Detroit Auto Show, the concept had a 4 cylinder turbo diesel engine. The rumor is though, the South Koreans plan to make an all new diesel engine just for the Santa Cruz. In response to all this fascination with the Santa Cruz, Hyundai has had to seriously consider actually putting the concept into production. The only thing stopping them at this point is production capability, all of the Korean auto group’s plants are at capacity. However, there is a rumor that Hyundai will be building a second plant in Alabama. If made, it will make all of the company’s taller autos.