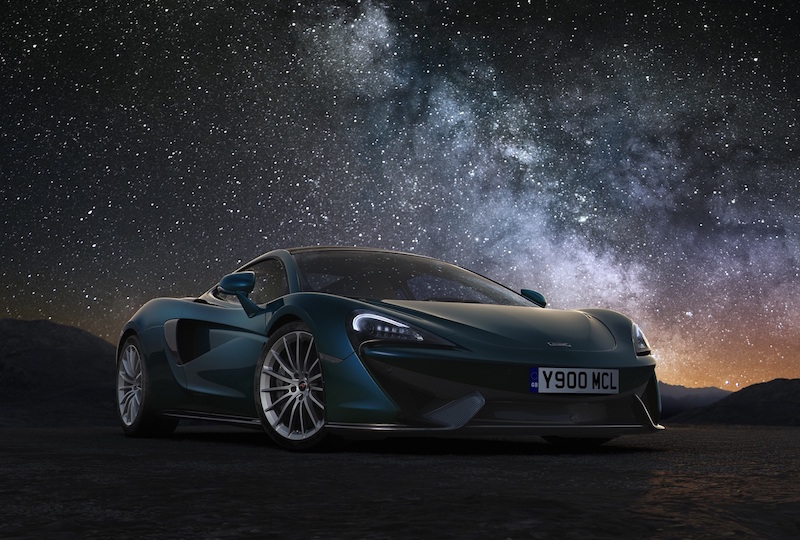 To use the parlance of our U.K. friends, the McLaren Sports Series of vehicles are simply smashing. As automotive works of art, you can’t do much worse than the 570S Coupe and 540C Coupe. To extend the simile further, McLaren cars are like rare and expensive gallery paintings. McLaren has only sold about 1,500 units in the past two years—due to the fact that they don’t make that many—with the most expensive model selling for 2 million pounds (or $1,435,800 in American currency). While most of us will never own a McLaren or the Mona Lisa, we can still admire them as beautiful works of art. For those discriminating and well-heeled connoisseurs, McLaren announced the introduction of the 2017 570GT (pictured). The 2017 570GT, which is the first hatchback ever offered by McLaren, will make its worldwide debut at the 2016 Geneva Motor Show in early March. The 2017 570GT will be the latest addition to the Sports Series when it’s unveiled at the Geneva International Motor Show this coming week. The automaker promises that it’s offering a more “practical” version of its 650S and 570S models with the 2017 McLaren 570GT. Of course, practicality is a relative term: the 570GT will leave buyers $198,950 poorer in their bank accounts. Though it resembles a tricked-out track car, McLaren is marketing the 2017 570GT as a workaday vehicle with sports-level performance. As the first hatchback ever offered by McLaren, the 2017 570GT offers such perks as luxurious Nappa leather seats and adjustable, heated seats. Passengers will also have access to 12.4 cubic feet of cargo room (thereby eclipsing the cargo room other Sports Series models provide by 7.8 cubic feet) and 5.3 cubic feet of luggage room. At the same time, the 2017 570GT is clearly not the vanilla station wagon you might use to drive to the grocery store. Arguably the most stare-worthy aspect of this McLaren model is the panoramic roof that’s been referred to as a “glasshouse.” Much like the Tesla Model S, the 570GT sports an all-glass panoramic roof that extends the length of the car roof. For those who might worry that a large glass roof might lead to excessive brightness, fear not—the glass is treated with an 18 percent tint and can even absorb solar radiation. Other distinctive features of the 570GT include McLaren’s iconic dihedral door design that allows the car doors to open in an upward arch and Pirelli P Zero tires to reduce cabin noise. The noise-cancelling feature will come in particularly handy whether you’re driving a troop of noisy kids or kicking the 570GT into high gear. Because it’s a McLaren, the 2017 570GT offers impressive horsepower: 562 horsepower, to be exact, along with 443 pound-feet of torque. All this power stems from a 3.8-liter twin turbo V8 M838TE engine that can achieve 0 to 62 in 3.4 seconds, along with a top speed of 204 mph. You can register your interest with McLaren should you be interested in purchasing a McLaren (and who wouldn’t be interested, right?). If you’re planning on a trip to Switzerland, you can check out the 2017 570GT in person at the 86th International Motor Show, which will be held in Geneva from March 3rd to the 13th. Information about the event can be found on the Geneva International Motor Show site.