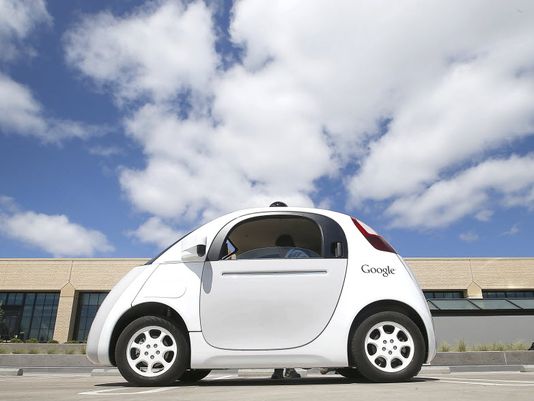 Anyone remember A.I. Artificial Intelligence? Don’t feel too bad if you don’t: it was a kinda mediocre Spielberg flick starring the kid from The Sixth Sense as an android designed to feel human emotions. While the AI in a Google car (pictured) can’t necessary replicate the emotional range of a master thespian like Haley Joel Osment, it can do something that the actor couldn’t do back then: legally drive a car. In an exclusive Reuters report, the National Highway Traffic Safety Administration (NHTSA) informed Alphabet, Google’s parent company, that the Google AI technology that directs its self-driving vehicles is, in the eyes of the law, the same as a human driver. Reuters uncovered the NHTSA letter, dated February 4, in which the agency acknowledges that vehicles piloted by Google AI “will not have a ‘driver’ in the traditional sense,” but may be held equally accountable for their actions just the same. With that said, the NHTSA makes clear in its letter that it wants self-driving automakers to develop viable active safety technologies that would activate without the intervention of a human driver. The question at hand is the extent to which human passengers should be informed about what’s happening with their self-driving vehicles. As Karl Brauer of Kelley Blue Book tells Reuters, having the NHTSA define Google AI as a driver “could substantially streamline the process of putting autonomous vehicles on the road.” Along these lines, NHTSA says it’ll draft autonomous vehicle guidelines within the next six months, which should further expedite the development process. But don’t reserve your Google car just yet: it’ll likely take years before the self-driving regulatory process is complete. We tend to think that corporations as being extremely adverse to any type of regulation, but that’s not the case here. In fact, the automakers looking to manufacture autonomous vehicles welcome regulations that would make them legally responsible for any accidents that may occur. With this regulatory framework in place, companies like Google can continue unimpeded in their goal of developing the AI capabilities of self-driving vehicles without worrying about any legal pitfalls down the road. If you think about it, giving self-driving vehicles personhood is the final frontier in Google AI technology. Under current legal strictures, autonomous vehicles aren’t people, and therefore cannot be held liable for any of the damages, injuries or deaths they may cause. But the NHTSA letter would give consumers some recourse in cases where they get involved in an accident involving Google AI. On the other hand, we’re a litigious country by heart, so suing a car may be less than satisfying to some (although the image of an irate motorist dragging a Google self-driving vehicle to court is certainly an amusing one.) In the NHTSA letter, Google expressed its reservations about allowing humans to take control of its self-driving vehicles on the basis that it “could be detrimental to safety.” This might seem counterintuitive, but it makes sense if you remember those occasions when you were at the wheel and you had a backseat driver nagging you. In this scenario, the Google AI piloting the autonomous vehicle is the driver and its human passenger the annoying person telling you that everything you’re doing on the road is wrong. It’ll take some time before we as a culture let go of the idea that cars should have things like steering wheels that humans need to drive but AI systems don’t. This is just one way that self-driving vehicles will revolutionize automotive design—without a steering wheel, for instance, passengers will have even more legroom, which in turn would allow humans to stretch out their legs. Or it may enable auto companies to add more infotainment systems and the like, thereby signaling the end of the traditional dashboard as we know it. For its part, Google reserved comment as it’s currently evaluating the NHTSA letter. Presumably, the tech giant will have something to say on the matter sometime soon—and when they do, Auto Publishers will be sure to fill you in. Image Credit: Tony Avelar/AP