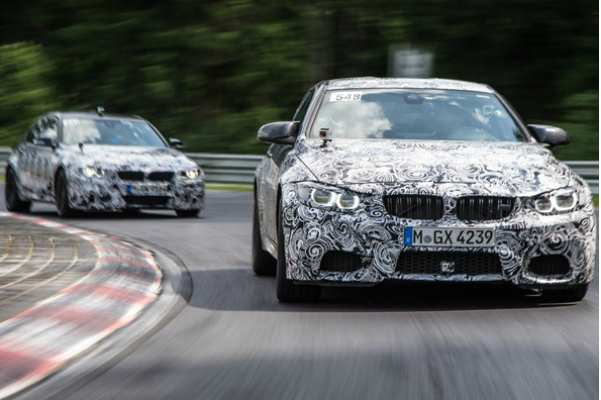 For as long as I can remember, the BMW M5 has been the gold standard for sports sedans. They mix together a family friendly car with family frightening engineering. Needless to say, if you own one I would not suggest infusing the car with M-Power with a wife (or husband if she is the family driver) or kids in the car. It seems a few lucky souls at Nürburgring got a chance to peek at the upcoming 2018 BMW M5 as it was doing a very short test. Surprisingly, the most intriguing part of the story to me is not the car itself. Again, I am very used to the M5 being incredible, the stats get better every generation. I will get to the actual ultimate driving machine in a second (this is not the ultimate driving machine, maybe a). Is BMW allowed to do tests on the Nürburgring? I thought that the owners of the Nürburgring outlawed using it as a test track. Is the Bavarian company special due to proximity, or are the owners getting lenient? I hope they are. It is the perfect test track, very technically challenging, so it effectively tests every performance aspect of a car. But there are many other tracks that can do that, what makes Nürburgring special is the fact that it is a perfect length. Nobody wants to argue about .00001 of a second, but shaving a second or so off on an 8-ish minute track is perfect. Now on to the rub, a few people got a peek at the camouflaged BMW M5, taking some test runs before its 2018 release. It has been completely redesigned atop the their new Carbon-Core, which debuted on the i8 and now in the 2016 7 series. For those who aren’t on the cutting edge of how BMW builds their frames… shame on you… for having a life and responsibilities. Kidding aside, it is just a new way that they build their frames. They exploit different elemental strengths, to make a perfect blend of lightness and stiffness. First and foremost is carbon fiber. BMW has mastered the art of Carbon Fiber Reinforced Polymers (CFRP), which is a fancy way of saying the blend their carbon fiber with plastic for increased strength and decreased price. They have gotten to make CFRP on an industrial scale for the first time ever. Carbon fiber is used where the car needs to be most rigid. Usually reinforcing aluminum, like in the pillars, but in some places, it stands alone like in the roof. The result of all the clever element blending is a decrease of 100 kilos. As impressive as the carbon-core is, it is not too surprising. Now that they have industrialized the process, soon all performance BMWs will have it, then it will be standard across the range. What is revolutionary, is the fact that the M5 might be offered in 4 wheel drive for the first time ever. The Bavarian company, has recently acquired a quattro engineer from their rival, Audi. Beyond these set facts, lies a lot of speculation. One of the assumptions being that the new Bimmer will be pushing out over 600 horses and 550 foot pounds of torque. Either way, a peek is all that is necessary to know, when the BMW M5 drops in 2018 it will still be at the top of the performance range.