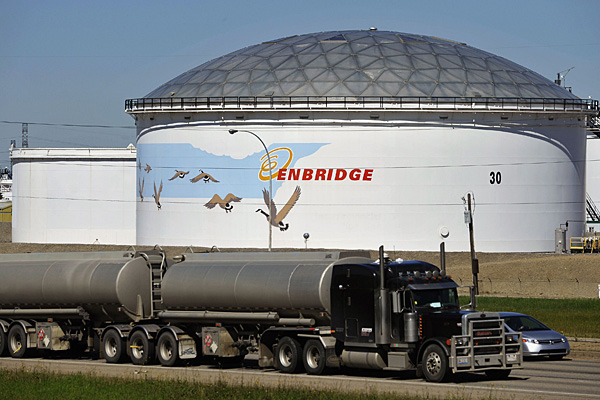 While the world is fixated on diesel Volkswagen Passenger Cars, most people haven’t the faintest fancy of even knowing what Enbridge Inc. is or does. Too bad for those of them reading this particular piece of literature, because they are about to be dosed with the disturbing knowledge of the spill filled oil company’s recent history. This article’s intention is to articulate the root of recurring environmental issues, using Enbridge and Volkswagen Passenger Cars as examples, while still contrasting their effects for perspective on the matter. Frankly, Enbridge is an example of the adage from Futurama, “when you do things right, people won’t be sure you’ve done anything at all.” For years no one knew anything about the Canadian oil company, despite the fact that thousands of people had their oil pipelines potentially or literally underfoot. It was not until one of 800 oil spills violated their vicinity that locals knew anything about the company. Enbridge’s largest spill could not have come at a more felicitous time for the company. While the world was fixated on the Deepwater Horizon disaster. Three months into BP’s cleanup efforts, a pipe running under the Kalamazoo River burst. It is the largest inland oil spill in US history, over a million gallons of bitumen laden tar sands crude poisoned the fresh water river. Tar sand oil has a higher toxic content than most petroleum products. NOx emissions from diesel exhaust is quickly dispersed. Granted, the emissions are still harmful and the amount Diesel Volkswagen Passenger Cars let loose is unconscionable, but perspectively speaking, Enbridge’s 800 oil spills take the toxic cake. While both companies acted in greed with no concern for human or environmental well being, they are not detached in deserving denouncement. However, before decries are dealt, it should be mentioned, while the calamities currently under consideration are primarily within American borders, neither company is American, as such it is not an exclusive American problem. The cowboy capitalist system in which both companies compete begets the brunt of the blame. Both companies are subject to Department of Transportation (DoT), Environmental Protection Agency (EPA) and/or Pipeline and Hazardous Material Safety Agency (PHMSA) scrutiny, yet neither were prevented from doing their dirty deeds. Automakers test their own emissions and send the results to the proper authorities (that’s why Volkswagen Passenger Cars were not the only ones found to be cheating). Purveyors of pipelines are alone allowed to decide when repairs or replacement is necessary. Before the Kalamazoo spill, even Enbridge’s subjective reports showed the need for repairs on the pipeline. There were 390 individual indicators of corrosion found in the pipes in two inspections in 2008 and 2009. Instead of addressing the issues, Enbridge reduces pressure and drags its PHMSA sanctioned feet for a year. In July of 2010 preliminary repairs begin on line 6B. Two weeks later, Enbridge tells PHMSA that they would like to continue using 6B for another 2.5 years at reduced pressure. They told congress; if any problems arose, they could intervene “almost instantaneously.” Ten days later, an instant lasted 17 hours while a 40 miles of the Kalamazoo river were covered in oil. Volkswagen Passenger Cars will cause innumerable premature deaths, with their millions of NOx fumes flowing through the atmosphere, but how is that worse than Enbridge's millions of spilled gallons due to its perspective on neglecting vital repairs? The fines levied would have one think so. Furthermore, how can anyone expect essential intrinsic improvements without regulatory recovery?