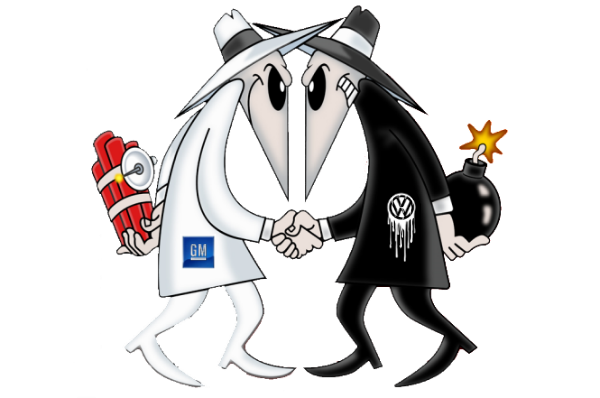 In the past year, two Motor Company specific recalls have reigned prevalent, one involving Volkswagen Passenger Cars, the other was for General Motors (GM) vehicles. Both have been reduced to engineering issues resulting in a monumental number of cars to be deemed unroadworthy in the US. While it is simple to mark a tally for each and every death directly attributed to the GM’s ignition switch defect, impressing the same perspective on Volkswagen Passenger Cars’ diesel scandal is not quite as elementary. For a quick recap, General Motors allowed around 26.8 million cars in the US knowing full well that their vehicles’ ignition switches were faulty. Before installations, GM’s ignition switch subsidiary said the switches were subpar, yet the head engineer greenlit them anyway. If said switch was bumped or the keys were too heavy, the engine would shut off the engine turning off airbags, power steering and brakes and leaving the driver, passengers, and all around them at the mercy of physics. VW AG installed defeat devices on 11 million diesel cars that knew when emissions tests were being performed and only performed optimally in those intervals. During everyday driving it was spewing NOx (Nitrogen Oxides) well past the legal limit, destroying the environment and diminishing the inhabitants future. With General Motors’ misdeeds, finding a total tally of deaths is as straightforward as a pedestrian Google search. With that simple deed one would know that there are at least 124 deaths and 275 injuries (not including the 3500 injuries and 350 deaths considered ineligible) immediately accredited to GM’s transgressions. To address the numbers aspect of the comparison, the New York Times did an interesting piece that boiled the VW AG‘s pollution down to a mortality rate. In conjunction with two groups of researchers, the NYT presented two methodologies. The first used power plant pollution production as a base. A group of countries decided to cut their NOx emissions by 350 tons per year. Then they contrasted the resulting decrease in deaths with the countries that did not cut back, the result being 5 fewer deaths per 100,000 people. The researchers then asserted; due to the 46,000 tons Volkswagen Auto Group (VW AG) is said to have polluted; that 106 deaths would have resulted from VW AG’s diesel vehicles since 2008. The second research method was devised by an Associate Professor at MIT’s Department of Earth, Atmospheric, and Planetary Sciences. Noelle Eckley Selin, used the Environmental Protection Agency’s (EPA) formula for calculating damages due to pollution. Her calculations yielded a need for an increase, she said there would be 40 more due to diesel pollution. Other publication returned different results, Vox for example said the spectrum would be from 74 to 404 subsequent deaths due to diesel emissions. However, even Vox admitted it was almost impossible to anywhere near the higher end if the spectrum as concentration is needed to be deadly, and the emissions would be dispersed without delay. As far as anyone is concerned there are no other circumstances that could be considered. However, I do propose there might be some oversights with that basic comparison. The Volkswagen Passenger Car scandal is more complicated and requires perspective for proper parallels with General Motors, because the damage is not as transparent (though the pollution is). First off, even NYT admitted their numbers would likely be higher due to simplistic calculations, and worst case numbers. Id est, the calculations used 39 times the legal limit of pollution as dictated by the EPA. In reality, there was substantial fluctuation between 10 and 40 times the legal limit when in normal driving conditions. And it is unclear whether they calculated all 11 million or only the half million within US borders. Beyond that, there is a small benefit of lower CO2 and particulate (soot) emissions when NOx is increased. But that pales in relation to the amount of extra NOx in the atmosphere. NOx is known to damage and inflame lungs, causes higher instances influenza infections, and exacerbates existing conditions such as: Asthma, Emphysema and chronic bronchitis. General Motors’ mechanical defects caused instantaneous deaths, whereas VW AG’s are slow. A faulty ignition switch immediately threatens death and damage to anyone who comes into the vicinity of an affected vehicle on the road. The NOx emissions were also spread wherever the driver went, but the affected were typically already ailing. Pollution affects all by slowly shaving less vibrant years away. At the end of the day, Diesel Volkswagen Passenger Cars may take more lives than GM did, but perspective may lie in years lost and environmental damage as opposed to the number of lives lost. Killing Octogenarians is not the same as 18 year olds, but one must also consider the environmental future for said 18 year olds. Interestingly, it is not illegal to supply a car that kills the public to the public, but lying to them is (though less so than lying to the Government). Therefore, VW AG is looking at an $18 billion fine for providing a fully functional (albeit deceitful) product, while General Motors received a $800 million dollar slap on the wrist for essentially equal aggregate devastation. Now, I’m not saying $18 billion is too much, on the contrary, that punishment fits the crime. GM getting only $800,000, however, is a insult to everyone on the other side of the Justice system. When it comes to regrettable business of greed, I will take caustic but considerably clever chicanery, over pathetically negligent handiwork any day. The latter was just as calculated and conscious a decision without the meager amelioration of intelligence.