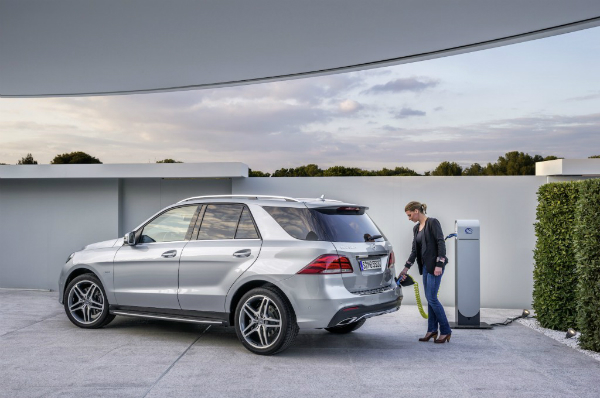 Mercedes-Benz’s new 2015 GLE line may seem like an all-new model, but it actually is not. It is just an SUV by another name. Merc is now giving all of its SUVs the G distinction, I assume for clarity’s sake. Mercedes’s GLE550e seems to be the most limited of the plug-in Hybrid SUVs hitting the market, but if it is a race, they might be getting there first as it is supposed to be released in September. While Daimler is planning on hitting the market as early as it gets in the fall, they will not be the first SUV to enter the plug-in market. Surprisingly, the first was a Porsche. The Cayenne S E-Hybrid can already be bought from your local dealership. I currently do not know much about it other than it is the second best looking SUV in the market (its baby brother, the Macan is the best looking SUV ever made). As, such I will be looking into it last, after all of the unreleased ones. The Mercedes is the most powerful of the four competitors. However, more than likely, it will also be the least gas efficient. Both the Merc and Porsche start with a massive V6, when compared to the tiny two liter four cylinders that BMW and Volvo use. Most impressively, the Volvo only puts out 9 less horsepower from a 2 liter engine. The electric engine on the Mercedes brings total horsepower up to 436. Which is much higher than the Volvo's 407, but the torque is much closer. They are only 7 foot pounds apart from each other. Unfortunately, Daimler has not released any official performance specs. On power alone people might assume it is the fastest, but according to green car reports, they clock it at about 7 seconds zero to 60. Which is far higher than the Volvo's 5.6, but very competitive with BMW as far as fall releases go. Beyond that, the Porsche Cayenne accomplishes that feat in 5.4 seconds. Again it is likely that either it or the Mercedes GLE550e will be the thirstiest of SUVs in the race for the best plug-in Hybrid. So it will boil down to the driver, can they sacrifice a marginal decrease in efficiency for a moderate boost in fun? The Mercedes also seems to have some emphasis on the off-roading element. Which is interesting in of itself. Because, typically off-roading is seen to be an environmentally unfriendly action, but because it is a hybrid does that reach net-zero on that spectrum? Or is it just a lesser of two evils type situation? Regardless, Mercedes’s Airmatic suspension; will be coming standard, along with an inter-axle locking differential similar to those found in Benz 18-wheelers, except this version is electronically managed by the car itself.  All the driver has to do is set the dynamic select to OFF-ROAD or OFF-ROAD+ and the car will handle the rest. The GLE series will also have an optional ADS (Active Dampening System), though I am not sure if it will be an option on the 550e. This system is designed to anticipate road conditions and adjust to them before the car reaches them (in a less race-centric way than BMW). This for example will definitely be on pothole watch, while I am worried the X5’s might not be. The ADS can raise the Merc to safety if need be. At full height, ground clearance will be 11 inches. More pertinent after Texas’s floods is the fording depth. The maximum distance from the ground to the GLE’s air intake system is an inch shy of two feet. Which, is respectable considering Off-roading royalty, (the Jeep Wrangler) is not too too far ahead with its 30 inches. So on first glance of the SUV’s press releases it seems each will have their own focus in the Plug-in hybrid race; the Mercedes GLE550e is trying to corner the off-road market. The Volvo wants to be the prettiest, and it is the cleanest. The BMW wants to be taken serious as an ultimate driving machine (and to be present while they work on the all electric version). The Porsche, already knows it is the prettiest and is more than likely the fastest. So the onus will all be on the driver and their preferences in an auto.