Porsche on a Mission E to Beat Tesla 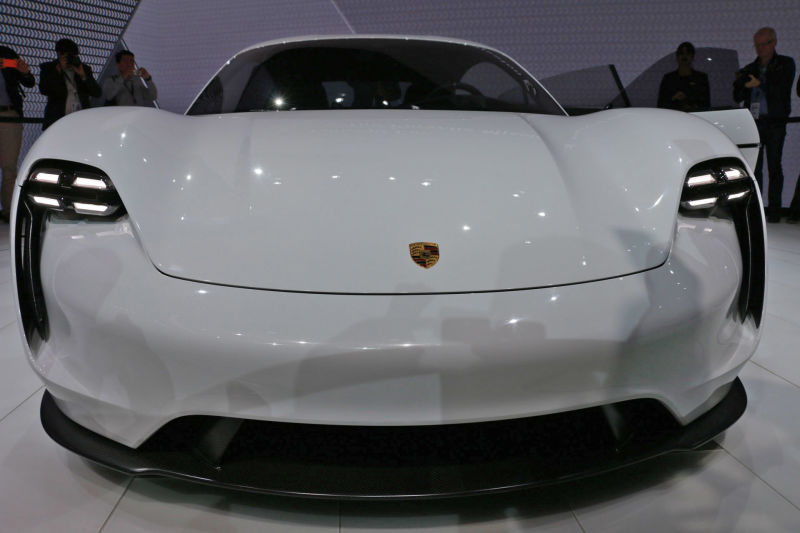 When you’re top gun, everyone’s gonna come gunning for you. Every automaker from Mercedes to Audi—and even tech companies like Apple—claims to have an electric battery-powered luxury vehicle in development that can unseat the Tesla Model S for market supremacy. The latest challenger to the Tesla throne is Porsche, who appears to making good on CEO Matthias Mueller’s promise to produce a purely electric car by the end of the decade. Porsche delivered on Mueller’s promises a bit earlier than expected when it debuted the Mission E concept car on the eve of the 2015 Frankfurt Motor Show. In brief: the Mission E is Porsche’s first all electric four-seat sports car prototype that can go from zero to 62 miles per hour in under 3.5 seconds, a 310-mile driving range, and a 15-minute charging time to reach 80 percent battery capacity. The stylish Mission E all-electric concept looks like its “parents” were a Porsche 911 and 918 Plug-In Hybrid, with traces of the Panamera electric sedan thrown in for good measure. In fact, the all-new powertrain for the Mission E has a close relative to the one housed in the 919 plug-in hybrid supercar model that recently won the 2015 24 Hours of Le Mans race. The Mission E sports two permanently magnet synchronous motors (PMSM) that generate a combined 600 horsepower, which may not seem like much until you consider the lightweight design of the Mission E, whose body is a composite of aluminum, steel and carbon fiber reinforced polymer. Along with its low center of gravity and optimal weight distribution, the Mission E offers high-performance enhanced driving dynamics in an electric vehicle package. Of course, all that power doesn’t do a lick of good if the battery isn’t long lasting, and in this regard the Mission E doesn’t disappoint. The all-wheel drive system generates power in concert with Porsche Torque Vectoring, while the all-wheel steering enables controllable steering. This battery-powered Mission E Porsche delivers an 800-volt drive system that doubles what other competitor EVs can deliver. By way of comparison, Tesla’s Model S has a range of almost 300 miles and can reach 60 mph in 2.8 seconds, versus over 310 miles and 62 mph in 3.5 seconds for the Mission E. While Tesla may be tops in the battery powered luxury car field, Porsche is looking to carve its own niche by focusing on engine power and drivability—in other words, the stuff that makes a car a car—rather than bells and whistles like Internet connectivity and autonomous driving. For those who favor sleek and simple, the interiors of the Mission E are sure to delight. With its sports racecar-inspired bucket seat, elegant center console and unencumbered dash, the Mission E will appeal to Porsche fans with an appreciation for austere aesthetics. With that said, it’s not as if the Mission E will be totally devoid of creature comforts. While this Porsche concept won’t likely incorporate self-driving capabilities, the technological touches it does utilize are cutting edge. The dashboard includes a holographic display that showcases three-dimensional apps that can be individually selected by gesture control. The user also has the option of remotely configuring and updating the functional content of the Mission E via Porsche Car Connect. All in all, the Mission E concept appears to marry the immaculate design craftsmanship of the Porsche brand with the type of power and performance rarely seen in an electric battery-powered vehicle. The Mission E is scheduled to arrive sometime in 2019, so it appears that luxury EV fans will have a while to wait. For extensive detail on the Mission E, visit the Porsche newsroom. Image Credit: Jalopnik