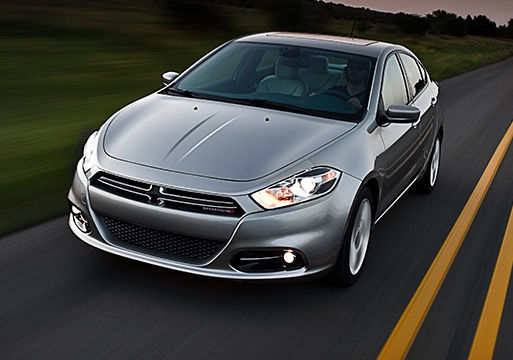 This past Friday, I wrote a piece for the Auto Publishers blog detailing Fiat Chrysler’s plans to emphasize production of crossovers, SUVs and trucks. FCA’s logic for this change is as follows: a) big vehicles, specifically pickups, jeeps and SUVs, are the big moneymakers in today’s auto market and b) current fuel prices make purchasing gas-guzzling vehicles a more palatable option now than in years past. One important tidbit that got obscured in last week’s news is the speculation that FCA might discontinue vehicles like the 2016 Dodge Dart (pictured) and the Chrysler 200. At the very least, FCA would much rather outsource production of the Dodge Dart and Chrysler 200 to another automaker who, in the words of FCA CEO Sergio Marchionne, would “allow [FCA] to access [its] architecture and effectively provide us the product from their facilities that would allow us to continue to cover that market.” In other words, FCA would like its automotive partner to assume all the financial risk in manufacturing crossovers but share in all the potential profit, thank you very much. Understandably, there haven’t exactly been a ton of automakers busting down the door of FCA headquarters on 25 St. James’s Street in London to sign that decidedly one-sided deal. Still, you can understand FCA’s point of view—given the company’s perilous financial state, this strategy represents “the best chance for FCA to overcome a perilous lack of resources and find the merger partner it craves,” writes Larry Vellequette of Automotive News. Maybe Marchionne’s powers of negotiation are such that FCA can trick…er, persuade a yet-to-be-named subcontracting automaker to assume the burden of manufacturing small-to-mid-sized vehicles like the Dodge Dart on its behalf. Even if the scheme is unsuccessful, Vellequette believes that it would at least make FCA a more likely candidate to merge with another automaker—which, as we all know, is what Marchionne wants most. If all goes according to plan, FCA will cease making the Dodge Dart and Chrysler 200 by 2017. At that point, the two plants currently devoted to producing the Dart and 200 would shift to manufacturing pickups and other heavy-duty vehicles. For instance, the Belvidere Assembly plant in Illinois where the Dodge Dart is currently made would be devoted to the next-gen version of the Jeep Cherokee. By 2018, the Dodge Dart and Chrysler 200 will have been fully discontinued—coincidentally or not, 2018 is the same year when Marchionne says he’ll leave FCA, presumably to pursue his passion to merge with his home garden or something. Both Vellequette and I agree that the FCA strategy is potentially fraught with peril, particularly since it relies on consumer tastes for larger vehicles like trucks and SUVs to increase while gas prices decrease or stay steady. The move to excise less profitable models from its production schedule may help keep FCA in the black, even if it doesn’t appear to be a viable strategy for the long term. Either way, the move to discontinue the Dodge Dart and Chrysler 200 will result in a leaner, meaner FCA. The question is, will FCA end up going hungry because of it? Regardless of the outcome, Auto Publishers will be here to fill you in on the latest news regarding FCA and the rest of the automotive world.