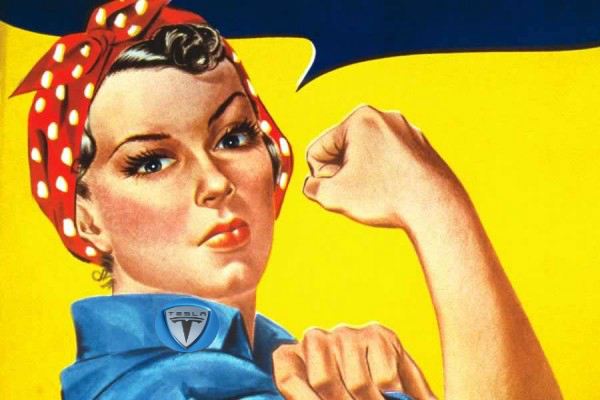 Tesla Motors never leaves the headlines. As a startup doing exceedingly well in a particularly startup unfriendly market; the automotive industry; they stumble from crisis to conquest on a biweekly basis. Tesla Motors just got a moderate boost in publicity by supporting the #ilooklikeanengineer movement. The movement started when a young software engineer decided to help her company; OneLogin’s recruiting campaign. The campaign was planned and executed in a day with simple pictures and quotes from a handful of their staff members. The retort was immediate and explosively insightful. It should be mentioned that Isis Anchalee (or Wegner… however she self-identifies really) is a Full-Stack developer for OneLogin. For those unfamiliar with that term, it means that she is the real deal. Full Stack engineers have intimate knowledge with the whole process of software development (full stack), and are responsible for making sure that every facet runs kink-free. Few companies have the luxury of hiring them (Facebook, Google, Tesla Motors, Apple, Etc.), because they are few and far between; they do the jobs of many (because they are freakishly talented) in the interest of removing any communication issues, thereby making the process run smoother. As a full stack engineer in a software company, it is a safe assumption that Isis is a modern day renaissance woman for her company. The day in question she agreed to go one step further for her company. As an expressed “extreme introvert”, she stepped well out of her comfort zone and allowed the company to put her face and quote up on billboards. The response was repulsive. Simply due to being born with two X chromosomes (it probably did not help that she is excessively attractive (which is another stereotype in it of itself)), Isis and her campaign were immediately written off as indulging a demographic. The only debate on the matter was whether it was pandering to men or women. Isis was so disillusioned with society’s knee jerk response, that she made a post on Medium’s Coffeelicious. The post detailed her hardships in just being a woman in the workplace, including extreme sexual harassment.The post fueled a parallel campaign on twitter: #ilooklikeanengineer. In the wake of the #ilooklikeanengineer movement, a Tesla Motors executive Erin Brooks wrote a commentary on Fortune to show her support. In it, she detailed the moment she discovered the harsh stereotype; walking into a coveted internship at Ford Motor Company as a 16 year old senior. Brooks did not bring much attention to the horrible fact, that she felt out of place at an internship when she likely the most qualified to be there. The now strategic sourcing manager of core technologies at Tesla Motors who had already skipped a grade at the time was feeling out of place somewhere that would be lucky to have her. Women are just as capable as men, they just (sometimes) reach a conclusion following a different path. It is unequivocally invaluable, to have a multitude routes reaching the same destination, it means the end goal is sound. Women differ on a intrinsic level to men, mostly due to biology (chemicals, hormones, and stuff), but also due to gender specific cultural education. Which, is a whole other can of worms (and likely the fundamental source of this systemic issue) but regardless, it is absolutely necessary to have equal representation of the other side of the coin. It is commendable that Tesla Motors is showing their support for #ilooklikeanengineer, but hopefully the extent of that support does not end with Erin Brooks. Honestly, it is poignant that she did not feel comfortable being a woman in the workplace until Brooks was so high ranking it was impossible not to take her seriously (which is not a comment against Tesla Motors). Furthermore, one woman checking one square for diversity should not be enough for any company or organization anywhere. Without new, diverse, and opposing ideas, challenging preconceived notions; systems will inevitably collapse under their own stress.