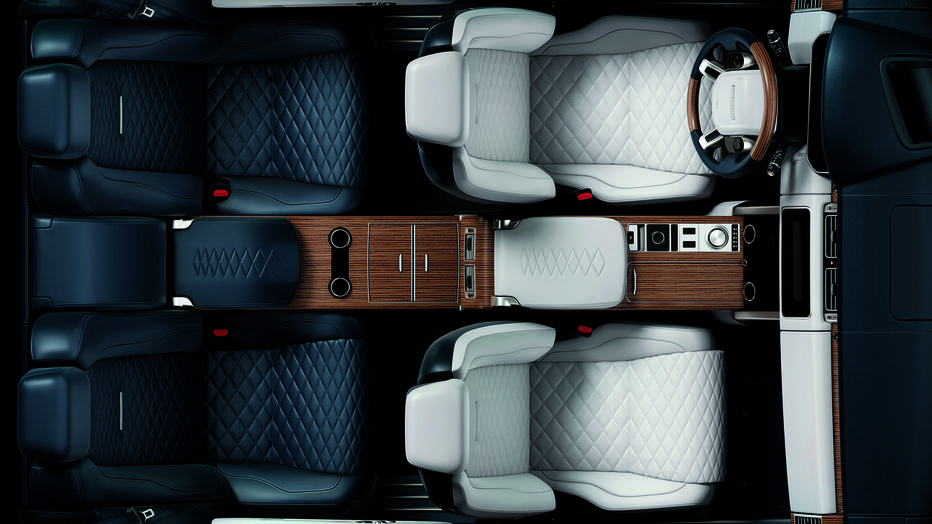 Land Rover recently confirmed that it has plans to bring out a Range Rover SV Coupe, one that will be a full-size luxury SUV that exhibits a stylish two-door silhouette. While the carmaker has yet to reveal the vehicle’s appearance, it has released a photo of the interior, and unless Land Rover has a trick or two up its development sleeves, the car company will be making this SUV as an actual coupe with only two doors.

The interior of the SUV looks just as a luxurious Range Rover should with plenty of wood elements and a fancy aluminum-trimmed console. Based on past reports, those who ride in the high-end SUV will enjoy supreme comfort regardless of their seat location. Diamond-quilted white leather is planned for the front seats with black leather in the back. This feature adds a higher degree of distinction to the vehicle since few cars have a different shade of leather in the front than they do in the back.

Land Rover is sure to offer the SUV with plenty of custom touches like climate control, a state-of-the-art infotainment system and heated and cooled seats. But, industry experts are currently wondering whether the carmaker will use the wheelbase that it has in place for its standard model or if it will create something shorter.

Those who know and love vehicles are hoping that the new SUV will come with a sleek roofline instead of a roof design that's similar to the one that Land Rover added to the X6. According to reports, the company will be manufacturing its coupe at the SV Technical Centre in Warwickshire.

It will also be interesting to see how Land Rover intends for backseat passengers to get there. Will they be forced to navigate the seat back as is usually the case with coupes? Or, does Land Rover have a new plan to make getting into the back easier. When it comes to power, reviewers predict that it will have something along the lines of a 550 horsepower 5.0-liter V8 engine.

Gerry McGovern, a lead designer for Land Rover, said, “The Range Rover SV Coupe is a highly compelling design with peerless refinement and uncompromised sophistication from its breathtaking exterior proportions to its sumptuous, beautifully appointed interior.” Land Rover expects that the vehicle model will appeal to people on an emotional level.

Land Rover started its luxury SUV line about 50 years ago. By bringing out the coupe, the company is offering its clients a tempting combination of incomparable luxury and rarity. The car company is presenting this special SUV during its 70th anniversary year. Launching the coupe is a great way to commemorate this important milestone.

Whether Land Rover follows through on its promise to release a true two-door SUV remains to be seen. Regardless, the vehicle will be a limited one. When Land Rover announced the SUV, it also stated that it only planned to manufacture 999 of them worldwide, increasing the exclusivity of the vehicle. This means that the price for the vehicle will surely be on the high side. On an official note, Land Rover hasn’t released pricing details for the SV Coupe yet. Car buyers should keep an eye out for it since it’s set to make its debut at the Geneva Motor Show, which is held early in March.