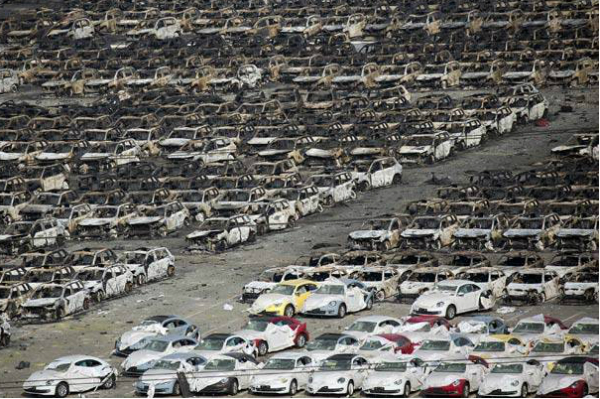 Tianjin has the 10th busiest port in the world by volume and 4th by weight, the city has its hand in all kinds of industries. On August 12th, two major explosions in a port city near the Chinese capital terrified all the residents of more than just the city. Mainly because the whole situation is mired in unanswered questions and governmental suppression.  It was even said that local publications are only allowed to repeat what has already been verified by government affiliated news agencies (i.e. Xinhua). One of the few organizations affected by the Tianjin disaster that have all answers they need is Volkswagen, who had 2,748 cars totaled in the fire following the explosions. The first question any person will ask, yet still unanswered, and on everyone’s mind; is what caused the explosion? As of now it is known that a fire within one of the warehouses owned by Ruihai International Logistics caused the explosions, but there nothing concrete about what started the fire, however there is no shortage of specific violations. According to government regulations, anything housing chemicals of a toxic or otherwise dangerous nature cannot be stored less than a kilometer away from residential areas. Which is woefully inadequate in it of itself; toxic fumes and the like can ride a gust of wind far further. Yet, a sickening number of people were sleeping less than half a kilometer away from the chemical explosions. Worse still than the fact that it was illegal just be in the vicinity of the apartments, they were breaking other laws on top of that. Most egregiously was the surplus of sodium cyanide stored. By law, warehouses are not allowed to keep over ten tonnes at a time. The warehouse owned by Ruihai International Logistics had 700 tonnes of the profoundly lethal compound; improperly packed together; at the time of ignition. That was so questionable per se, it is speculated that the material was actually being smuggled. Unfortunately, the lack of accountability in the whole process makes prosecuting a problem. It is hard to even figure out who actually owns the company. Tianjin is nestled within a Free Trade Zone, which features lax regulations on the automotive industry; comparatively; in regards to what they were. The FTZ is supposed to boost GDP in the already booming city, as it successfully did in Shanghai last year. One of the specific areas of interest in the Tianjin FTZ, is the Binhai New Area. Which has been accused of bending over backwards in order to help the corporations working there. The Binhai New Area (where the chemical explosions took place) is also increasingly popular within the automotive industry. Volkswagen was not the only automaker affected by the Tianjin fire, they are just the only company that has successfully tallied the total damage of 2,748 cars. There were an estimated 10,000 cars lost in the days after the explosion. The most troubling aspect of the whole ordeal is; the question of what all Ruihai International Logistics was storing? It seems not even the company knows. Instead of their having a clear ledger detailing all the materials stored, a void of clear information has lead to chaotic reports. The government has censored more than 50 websites for “creating panic… [and] spread[ing] groundless rumors.” Though, in the people’s defense, it is hard to expect the population to patiently wait for official information after an explosion equivalent to 21 tonnes of dynamite registered a 2.9 on the Richter scale with no clear explanation nearly a week later. While misinformation is quite an allegation, and one that should not be taken lightly, but the lack of transparency from the government in the entire situation is equally appalling. One of the few things that has been confirmed; is that people living in apartments less than two football fields away, have been unknowingly and illegally close to a warehouse that devotes itself to storing and transporting the hazardous petrochemicals. While potentially billions of dollars worth of vehicles/factories, and the at least hundreds of people working in them are even closer. Thus far, Volkswagen has named its 2,748 car toll for unwittingly doing business near a ticking time bomb, but the Tianjin Fire totaled cars or otherwise damaged dealings for Ford, Daimler, Nissan, BMW, Hyundai, Renault, and Toyota as well.