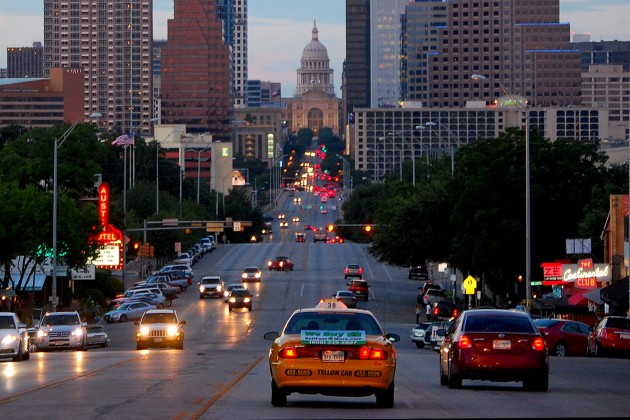 Austin recently started a highly publicized fight with ride sharing companies Lyft and Uber. The ride start up sourcing super powers; exhibited uncharacteristic coadjuvancy, by aligning in solidarity against the tyrannical will of the Citizens of “old Austin.” Unfortunately, in this case Uber and Lyft were slain by the Goliath that is Texas’s fourth biggest city and historic liberal haven. Basically, the authoritarian Austinites, were demanding that all workers, in all fields be fingerprinted because the city is heavily dependent on the lucrative fingerprinting industry. It is well known that the liberal residents run a rigorous driver recognition racket in the Hippie Haven, and the city Government lobbyists help them get away with it. In case it is in any way unclear, everything that precedes this statement is satire. If Uber and Lyft were actual people, not (corporations) that might be their side of the story. But that characterization of the situation is so off base, (hopefully) some might find it comical. One might be tempted to sympathize with Uber and Lyft; who are no longer providing rides in Austin... because they were forced out by mean old government bureaucrats. There are only two explanations for the aforementioned stance. It could be a product of title skimming, paired with a natural bias in favor of the technical stroke of genius that is for profit ride-sharing. However, siding with a heartless (genuinely as opposed to figuratively (though… sometimes)) corporation it could also be ingrained by one sided arguments. For example, this pro Uber and Lyft argument put forth by The Blaze is laughably frail, and indirectly hypocritical (I’m sure Glenn Beck (who owns The Blaze) would be appalled). First, for the inadvertently hypocritical. Beck’s writers claim that one group of people (who at least purport (or possibly pretend) to look out for the common man (“government bureaucrats”)) are out of touch with everyday consumers. Simultaneously, they dogmatize the will of another ambiguous amalgamation of opposing views (the market or whatever) with only one similar goal (to make money (licitly for their shareholders)). The ones who could legally be fired for trying to “benefit society…” they are the ones who really care about everyday citizens. The writer points to Lyft and Uber (more specifically, Uber’s) rating system as an infallible arbiter of safety. Implying, it renders mandatory fingerprint background checks obsolete. Sadly, that ignores the fact that a guy who (admitted to) murdering six people (literally while on duty) had a 4.7 out of five… oh, and all of these other incidents. In reality, it was Lyft and Uber (mostly Uber’s) brazen disregard for established laws, and unreasonable demands that resulted in their leaving the city. This is all part of a calculated attack against the mandatory fingerprinting in Texas. Uber and Lyft joined forces; they paid $9 million (trumping (i.e. spending 9 times as much than the previous) local government record) to push Proposition 1, and threatened to pull out of the city if it was not passed. Prop 1 would have repealed the law the requires drivers to pass a background check that includes fingerprint analysis. Collectively, Austin stayed resolute and called Lyft and Uber’s non bluff… something tells me this story is not over.