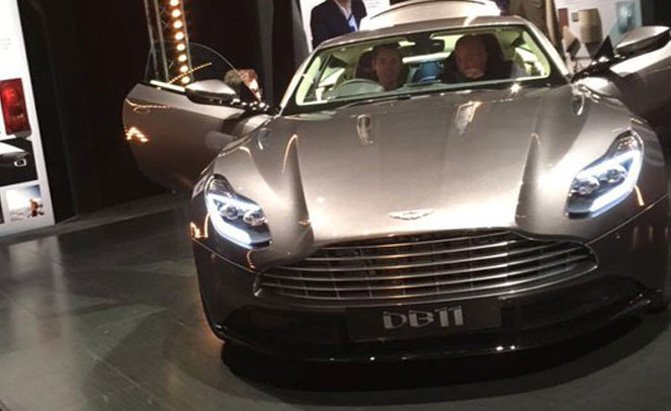 My penchant for Aston Martin, is obvious. I honestly believe they are the greatest automaker in the world, because they have never yielded to mediocrity, instead they have striven to make a product that exceeds all others in every way, even in the face of bankruptcy. Despite being (ostensibly) a single (super) instrument band, they are remarkably well rounded. If it were not for the fact that they are hindered by handmade man hours being in limited supply, I do not understand how anyone buys anything else in the remote price range. The engineers at Aston Martin blur the lines between Artist and Artisan, the put fun back into functional (most of the time), all while producing a soundtrack that would make Beethoven weep for his loss of hearing. Propaganda aside Aston has given fans something else to be excited about. Though; as I assume happens frequently to those own one; it reached its destination sooner than expected. Last month someone spotted the new Aston Martin DB11 on Spanish soil, and leaked it over a month before it was projected to premiere (at the Geneva Motor Show) during the first half of March. Aston Martin was in Spain on a closed course to shoot another promo (the first was the engine). I suppose someone snuck on set, and was able to snap a photo as the DB11 zoomed by. Today, there was another leak in the Aston Martin’s bucket full of aesthetic not-so-secrets. Not-so-secrets, both because they were prematurely released, and also because Marek Reichmann started his new design by tracing the old ones. The latter is by no means an insult, he struck; red diamonds riddled with Grandidierite; in the DB9. Moreover, I believe every change made to the original DB9 has been a step backwards. Back to the red diamond analogy, refining any further than is necessary means losing literally priceless carats. That said, I was impressed by the Aston Martin’s new face. Clearly, someone working with the Geneva Motor Show was able to sneak snap of Aston’s new snout. Again, I do not like it as much as the original DB9, but it is preferable to both the DB10 and the 177 of a kind One-77. Instead of deviating from the winning design, they kept almost everything the same, but added what looks like wingtip mascara (which to be fair, I don’t like on women either) and an iris to the established lights (which I like as much as the original LED accents). It is interesting that only one picture was leaked, one would think that if the person is already in position it should be as simple as a burst shot and in one swoop the car would be captured in its entirety. With only one picture, I like to imagine this was sort of a Bunyip (bigfoot/sasquatch) moment. Given the fact that the Twitter account linked to the original leak has been disbanded, it does sound like it could be what passes for a faux-conspiration (@RudyBenjamin13 posted in French). A person was hiking (or exploring the cave where Bunyip lives) when all of a sudden, they hear a roar in the distance. Ignoring all self preservation instincts, they run to find the source of this monstrous growl. Until they eventually see the mysterious creature in all its glory. After struggling to grasp and focus the camera, they only have time for one substantial picture, before the either the Aston Martin DB11 disappeared into the Spanish wilderness, or had to face overprotective Mama Martin (or an overzealous intellectual Property Lawyer). Photo Credit @Rudybenjamin13 or Indiancarsbikes.in (who appear to be the first to post the story and crop the image)