The Barracuda is Back and Badder Than Ever 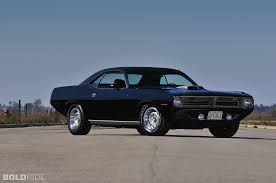 In the underwater kingdom, a barracuda is a long, large fish noted for its intimidating appearance. But in the automotive world, the Barracuda is a name that inspires hushed tones, mainly because it’s been so long since one has been seen in its natural environment on U.S. roads and highways. Some may even shoot you a quizzical look and ask, “Barracuda? Do they still even make those?” If Dodge has its way, those reactions may be replaced by ones of unbridled joy. Fiat Chrysler, Dodge’s parent company, unveiled a Barracuda convertible concept at an exclusive showcase for dealers in Las Vegas. Interestingly enough, the ‘Cuda is being offered as a Dodge vehicle rather than as a Plymouth, who was the vehicle’s original brand until Chrysler discontinued the line in 2001. Because the dealer meeting was closed to the press, we have no way of knowing what the modern-day Barracuda will look like, let alone how it’ll drive. (Could the lime green convertible above be a vision of a Barracuda to come?) Based on reports from inside the meeting, which were not taped or video recorded, dealers responded favorably to FCA’s offerings, which may have as much to do with the setting for the meeting, the world-famous Mandalay Bay Resort and Casino, as anything else. For younger readers, here’s a brief history lesson on the Barracuda. It was a popular pony car that was sold in the U.S. for much of the ‘60s and early ‘70s. (Check out the photo gallery above to see a vintage 1970 Hemi ‘Cuda.) By 1974, however, production of the pony car was scrapped due to the energy crisis that paralyzed the U.S. at the time. Although there have been whispers about reviving the Barracuda in the intervening years, there finally appears to be substance behind the rumors. Apparently the Barracuda isn’t the only old friend that Fiat Chrysler wants to reintroduce to customers. In fact, FCA apparently has plans to release as many as 30 new or like-new auto brands over the next two years. Among the more notable of these products is a next-generation Dodge Charger, which made its triumphant return to U.S. dealerships in 2006 after being absent for 19 years. Spies say that the new Charger will be based largely on the concept car that debuted back in 1999 (which can be seen in the photo gallery). Like the Barracuda, it’ll be based on the Alfa Romeo Giulia platform recently unveiled in Italy this June. In addition, dealers got their first look at next-gen versions of the Jeep Wranger and Jeep Grand Cherokee SRT Track Hawk at the secret meeting. Even the Jeep Grand Wagoner SUV—a brand last seen in the U.S. in the early ‘90s—will be making its long-awaited comeback. We’ve seen several high-profile automotive comebacks this year, most recently with the return of the Ranger and Bronco to the Ford pickup truck lineup. It’s enough to make gearheads speculate about what long-dormant auto brand might be next. Got any ideas on brands you’d like to see return? Let us know in the comments or by tweeting us at @autopublishers!