Buzz About the Mazda MX-5 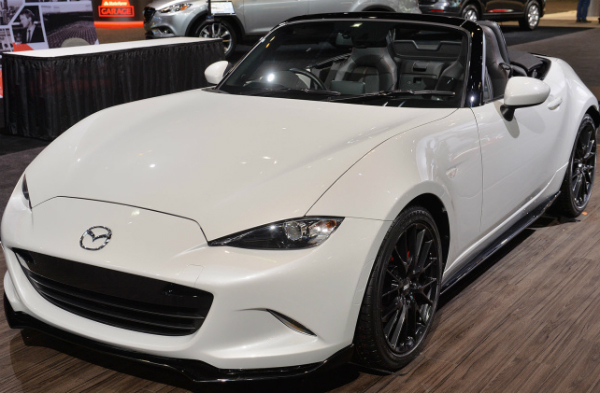 The Mazda MX-5 officially started shipping from the factory the day before July. Since then they have exceeded sales expectations; pre-delivery. Apparently everyone loves the fourth generation Miata. But why is the news buzzing so fervently about the newest Mazda MX-5, did the Japanese Automaker just knock this one out of the park? The Miata has always essentially existed in a vacuum. And by that I mean, there just are not many roadsters in history (relatively speaking in comparison to sedans and coupés), and most of them tried to get by on the novelty alone. When Mazda released the MX-5, it was the first of its kind, a decently cheap, reliable, convertible car for the masses. Since its inception, not many roadsters have surfaced. Typically, roadsters are high-end low-volume cars, but a few have taken a leap into the low-end market, unfortunately only the BMW’s Z-series got any traction. And for good reason, they were moderately better than the Mazda (initially; now they are much better), but also about twice the price of a Miata. So it was not hard for the plucky Mazda to attain the title of highest selling roadster of all time. However, if it must be called a roadster, it can be done so, only by the strictest legal definition. That is not an insult, the car is fantastic, the vernacular is what I think does not suit it. Roadster evokes the idea sports convertible, when the Miata is only sporty in that it is accurate. The handling is spot on which makes for unforgettable moments, but for the most part it is just a very sensible drive with the top down. For that reason, I humbly suggest a change in title. Any variation of Cabriolet would be acceptable. Because cabriolet, suggests the luxury of taking a ride just to enjoy the moment. The Miata would emulate that exact sensation anytime you hit a nice patch of road. I’m no PR specialist, but that sounds like a pretty good commercial. Currently, the Mazda MX-5 buzzing about the news, because the Cabriolet is entering its fourth generation. First and foremost, the change is very visceral. The Miata used to be considered a feminine car, but the KODO design has made this incantation much more aggressive. As part of the redesign, the famously featherweight MX-5 went on a diet, using the “gram strategy.” By the time the cabriolet reached the showroom it lost over 150 pounds, gram by gram. The 2 liter SKYACTIV engine in the fourth generation is the most powerful ever put in a Miata. There are 155 Horses pulling that cabriolet with the force of 148 foot pounds of torque. What is most impressive about that feat, is the fact that it was done while boosting efficiency by 20 percent. Now, when the six-speed automatic cabriolet hits the stress of city driving, the rider can still enjoy that they are getting 27 miles to the gallon in that moment. Of course the cabriolet will still handle like a dream, but that, a modest boost in output, and rear wheel drive do not a sports convertible make. My Jetta produces a respectable 177 foot pounds of torque and handles quite well, but if I took the top off it would not be a roadster. It would also have far less gas mileage, and weigh another 800 pounds. The Japanese automaker needs to play to its strengths not flex the muscles it does not have. This may be the closest thing Mazda has made, but the buzz will always be about how the Mazda MX-5 is an under-powered sports roadster. Mostly due to the now much more masculine aesthetics of this version of the Miata. But that is just semantics, the fourth generation is the best generation; it has already won a Red Dot: Best of the Best Award, and exceeded sales expectations. I loved the last generation Mazda when I drove it, and this model will be better in every way. I can not wait to go try it out.