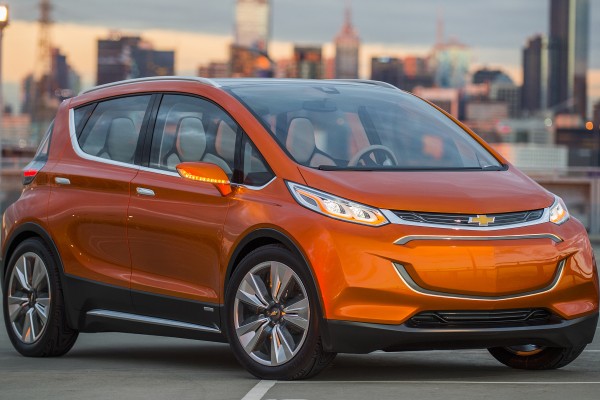 The Chevrolet Bolt is easy to confuse with the Volt. Both are made by the same company and  both are small electric cars are eligible for the $7500 tax credit. However, the Volt is a plug in hybrid, that claims to be a full electric with a battery extender (an internal combustion (IC) engine). The other is a true full electric. As such, the Bolt is wasting no time before gunning for the Tesla Model 3’s prestige, which will be a main competitor when it is released. Chevy’s full electric auto was announced quite a while ago; beginning of this year, in the North American International Auto Show (NAIAS) if I am not mistaken. When it came out, it was sporting the same color and design elements very similar to the BMW i3, while projecting performance figures similar to Tesla’s 70 kWh batteries. The Bolt was laden with exquisite materials such as Magnesium, Carbon Fiber and less fancy but light Aluminum. It also had a familiar Chevrolet style space-age design. The front end was similar to the Volt, except the lights were stolen straight from the year 2134. The grille was marginally more stylized than it is in the Volt, and they gave it a fat lip between grilles. That was just the Concept, most people assumed Chevrolet was just blowing smoke, like every Auto manufacturer does when their concept debuts. Everyone knows the car never looks exactly like their concepts. And the performance figures, are usually still projected goals as opposed to verified facts. A large portion of the doubts on the performance and/or range originate from the Spark EV’s range. While both the Volt and the Spark EV are class leading, their batteries are still getting under 70 miles per charge. Claiming a 200 mile range shows the Chevrolet Bolt is clearing gunning for Tesla customers. However, that does not mean the golden bow-tie is or was exaggerating. In fact, Chevy built over 50 prototypical Bolts to test the range and whatever else. Starting last month, those 50 camouflaged concepts started showing up on various auto authority sites. That means they have started testing their claims. Later that month, the figures came in, and new General Motors was not embellishing about their EV baby. Not only is their EV achieving their projected numbers, it has done so well they are pushing up production. Before the latest bump, they were slated to start production in October of 2016, which, not only put them well ahead of the Model III (which realistically will not be out until 2018), but also the Generation 2 Leaf. This puts them in pole position when the affordable EV race starts. Thus far, the race will consist of only 4 cars. The cars GM needs to look out for are: the Nissan Leaf, the BMW i3, and the Tesla Model III. Those are the only cars in the price range. The i3 is not likely to be an issue with its hefty price tag, the Leaf could pose a threat with its upgraded battery, and the Tesla will be a proper threat if the $35,000 sticker price is not like the Model S’s $75,000 starting price. The Chevrolet Bolt is jumping the gun and starting strong, as for Tesla, they will be a major competitor if their prices stay low.