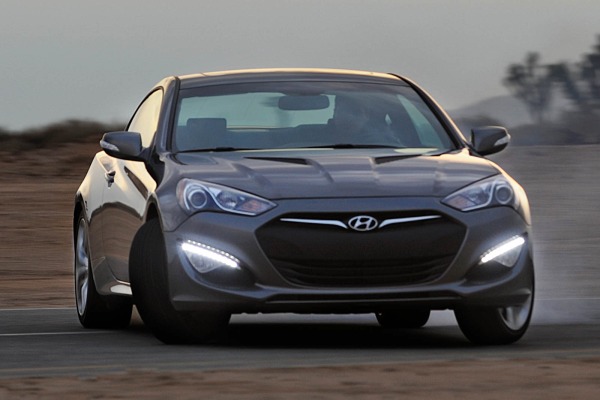 Hyundai recently released a concept car; the Vision G. The Vision G as the name may or may not imply is a sneak preview of what the Genesis subbrand might have in store for the future. It was a coupe that packed the power of the Genesis sedan’s 5.0 liter Tau V8. In my humble opinion, it seems that the Korean has monumental rebranding plans in store for their flagship company. Because, while the Vision G is a coupe sporting the Genesis Badge, it is unlikely to be a replacement for Hyundai’s minimalist (and only) sports car. If Genesis did branch off on its own, the Genesis Coupe; that I hold in such high esteem; would (or at least should) stay with the parent company. It is the perfect embodiment of a simple sports car, which is much closer to Hyundai’s instinctive wheelhouse, as opposed to the luxury, option addled Genesis soon to be brand. The sports car most comparable to the Hyundai Genesis Coupe is the Scion FR-S/Subaru BR-Z, which has a similar minimalist approach. Though, to be completely honest, it is not an actual contest. They are both rear wheel drive sports coupes, but the Genesis coupe simply delivers more for the money. It is proportionally larger, but the boost in power more than makes the difference in weight. Beyond that, the Genesis R Spec has more low end power in first gear, whereas the Scion is all mid-range Second and Third power; in which it still under performs in comparison. More relevant than the power, is the user friendliness. The Genesis Coupe provides all the creature comforts of a sensible car, without sacrificing the thrill of a sports car. Everything that is necessary to the modern transport experience is present and accounted for, but it is not trying any harder than Bluetooth. When driving the FR-S the knowledge that Mayhem is in your extensive blind spots just waiting to lie to you is nerve-wracking. The car is freakishly shouty to the point of annoyance. It may even have a Napoleon Complex, the way a chihuahua does. The Hyundai, does not have any of those defects. The visibility compared to any modern sports coupe is incredible, all the controls are intuitive, the back seat is an actual option, and the sound it makes (only when velocity voraciously exaggerated) is magnificent, only the Abarth beats it in that regard. The only real downside to the Genesis Coupe (and it is nothing to scoff at) is the gas mileage. Now that the 2.0 liter Turbo option has been removed, the gas mileage is unavoidably horrendous. It may average about 20 miles per gallon, with a 16 city and 25 highway rating. When it comes down to which car is a superior specimen, it is a toss up, it could go either way. The Hyundai Genesis Coupe, might be better thought of as not a sports car, but the last of a dying minimalist mentality; a naturally unassuming auto with just the right amount of power under the right pedal as possible. As mentioned before, it has enough power to put a smile on any driver’s face, but the price is the diminished gas mileage that comes standard with an old fashioned Naturally Aspirated V6 power plant. Ironically, the more impractical of the two in every other aspect, is the more mature choice overall due to the fact that its carbon footprint is as narrow as its tires.