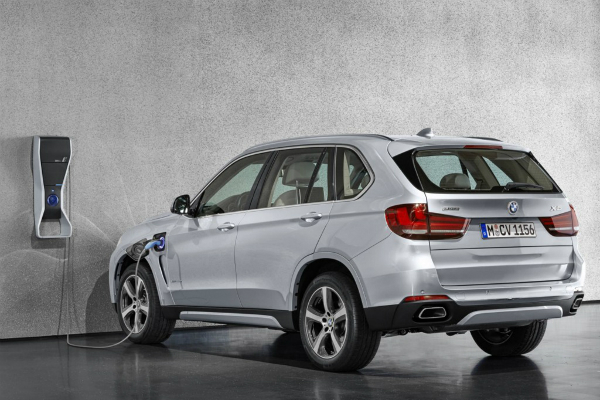 Three Automakers: BMW, Mercedes, and Volvo are trying to make a plug-in hybrid SUV before the release of the Tesla Model X. They are all being made by European Automotive royalty, but can they even compete with the scrappy upstart Tesla’s all electric SUV? Maybe... but first how do they stack up against one another. First up, a plugin SAV from BMW: their new X5 xDrive40e (is a mouthful) seems to emphasize ultimate racing machine. Just scrolling over the press release the first few sub-headings give one the impression that the Bavarian SAV vehicle can hold its own on a racetrack or a rally circuit. Then reading it is confirmed, they intend for this car to live up to their mantra. They start with the heart, the engine. BMW’s whole TwinPower Turbo family have already won awards for their impressive power to efficiency ratio. The one in the X5 xDrive40e will be a 2 liter 4 cylinder version that produces 240 horses and 260 torque at its peak. That will be complemented by 184 pounds of immediate torque from its 111 horsepower electric engine. So if one is interested in getting their SAV up to 60 in 6.5 seconds; the combined output would get them there is: 308 Horses and 332 pound feet of torque (I don’t understand how that math works). After that it is the xDrive’s time in the sunlight. The xDrive never turns off, even in all electric; the adaptive 4 wheel drive will always have the driver’s back in an instant. The front and rear wheels on BMW’s Plugin Hybrid X5 SAV; can have their own independent levels of torque, in case any assault; be it from weather, road, or race. The DSC (Dynamic Stability Control) can anticipate road conditions ahead to minimize under-or-oversteer. While the estimated 55 MPGe is impressive for an SUV of any sort, it is sort of underwhelming compared to its competitors. The Volt while much smaller, has double that. The all electric range on the Volt is also over 4 times that of the X5 xDrive40e, which is only 13 miles. As standard on BMWs of late, The X5’s driving dynamics can be altered. In this case, between 3 different options: Sport, Comfort, and ECO PRO. The ECO PRO features a coast mode that allows the to drift along without the engine if the driver removes their foot from the accelerator. It also adjusts power consumption from comfort settings such as the AC and heated elements. There are a few things one must sacrifice to save the planet with their X5. First, the optional third row seating in the petrol X5 cannot be paired with the Hybrid, nor can comfort seats be added to the 2nd row. None of the dynamic driving additions; such as Active Steering or Adaptive M suspension. BMW’s entry to the Plug-in Hybrid market seems to be a solid choice at a glance. However, if the Tesla Model X is all it is touted up to be the xDrive40e will pale in comparison. I do think that this is just a time crunched model being released for first in the market kudos. Their plugin hybrid is adequate, but I think BMW has an X5e that they are holding close to the chest; that electric SAV could be poised for quite a splash when it enters the market after the Model X.