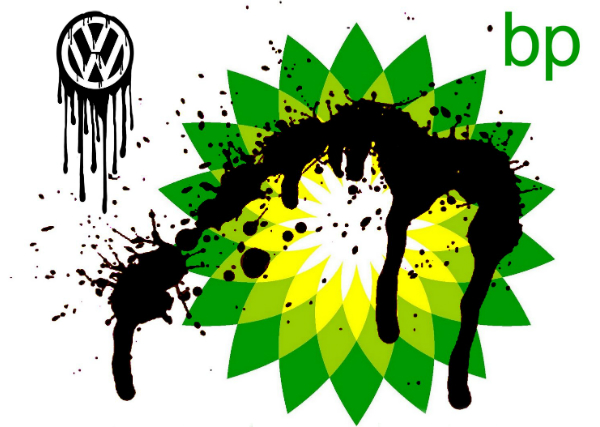 Volkswagen Passenger Cars (VW AG) is still reeling from the Public Relations Disaster that was its diesel scandal. Despite, getting an extra 2 Billion from selling its stake in Suzuki, the company posted its first quarterly loss ever (in measured history (they didn’t start quarterly reports until 2001)). The company took out €6.7 billion to fix the 9 million recalled vehicles in Europe and the US. For perspective, on how much that will amount to in the long run, ask the company formerly known as British Petroleum (BP). Eventually, Volkswagen Passenger Cars will be rummaged by the Environmental Protection Agency (EPA) for violations and spare cash. BP is responsible for the biggest oil leak in History. On April 20th, of 2010 Deepwater horizon exploded, because the Macondo well burst a mile below. The contingency plans were incommensurate at best. It was the exact strategy Exxon used in Valdez… which was a soaring success. BP was prepared for walrusi, but not containing oil at 35,055 feet. For perspective, Volkswagen Passenger Cars were equipped to address their issues, whereas the petroleum company that is beyond oil; was not even prepared. VW AG did egregiously ignore the EPA; that is unconscionable, but the collateral damage is that of a kitten compared to a panther. It is not even in the same stratosphere. BP’s underlying issue, is that drilling miles underwater is inherently dangerous. First, those depths are typically isolated, it is uncommon to find a part of earth so close to the core near a coastline. So, if something is defective, distance will delay aid. However, that fact is negligible when one considers how inexperienced humanity is when it comes to drilling at those depths. Deepwater Horizon was the first ever ultra deep (35,000 plus feet) drilling rig… and it literally exploded less than a day (20 hours) after the cement for the exploratory well was set. The pressure far too great for the company to deal with in any shape or fashion. The cement housing could not take it and ruptured immediately. The first line of defense was a Blowout Preventer (BOP), but it malfunctioned. There are two theories as to how it happened. One is that the BP/Halliburton/Transocean simply did not replace the batteries (which points to negligence). The other is a combination of two hypotheses that are essentially the same pressure issue, the petroleum’s thrust made the pipe impossible to cut. One says that the that the BOP (for perspective, picture giant safety scissors) went off too soon and the other is that the pipe bent. The second line of defense was absent from implementation for 87 days (Volkswagen Passenger Cars were polluting for almost 6 years). Ex-CEO Tony Hayward admitted that the lack of a capping stack was an (obvious) oversight. Even in quintessential conditions, the BOP only had a 50 percent success rate. That, per se, makes the Capping Stack a crucial condition prior to drilling. However this was not the case. The capping stack was not installed until after 210 million Gallons; according to Newsweek; of crude gushed out of Macondo. The tragic truth is that BP’s best retort is that it was only 100 million (general (government) consensus is 172). Unfortunately, this is just the beginning, At least with Volkswagen Passenger Cars the worst is over, the EPA will actually start regulating the industry (which it should have done since inception), and the proposed $18 billion tariff should terrify other Automotive tricksters. Regrettably, BP’s immediate debacle and subsequent $20.8 Billion fine has done little to deter other oil companies. A fiscally feeble company (relative to BP) is actually about to start drilling on the Mississippi Canyon Block 252 (i.e. exactly where Macondo was).