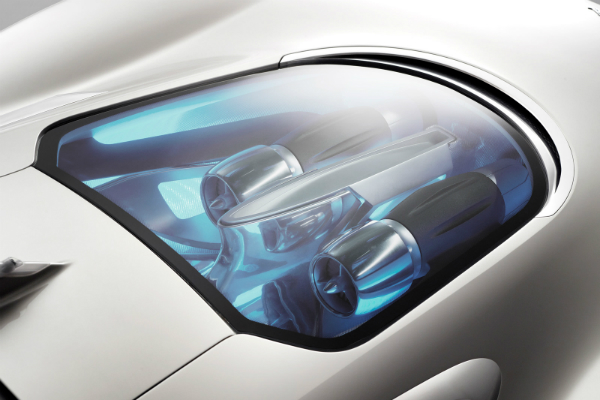 The Jaguar brand did not exist until 1935. Before then, the father of Jaguar was a coach builder; he made stunning bodies for cars that already existed. That year he made his first car, the sporty SS100. 75 years after the unveiling of their first production car, Jaguar made the best car under the badge; the C-X75, unfortunately, the completely conceptual concept will never hit the streets. That last part was not always true. For a brief, but brilliant bit of time, the C-X75 was driving towards a very limited release. The inspiration was top-trumps-manship, but whatever it took to get Jaguar to make the car was merited in my book. The potential prototype was a spectacular car, but it did away with the most endearing aspect of the one-off show-off. The Conceptual car the was unveiled in the spectacular Paris Auto Show in 2010 was the most innovative car ever made… at the time, one other concept has been similarly unique. What was best about the Jaguar C-X75 is that it was made using a powertrain never attempted before, hopefully it will live on in some form. In lieu of an Internal combustion engine, the Jag featured twin jet engines, and was capable of flight after 200 mph. But it really did have the two tiny jet engines. A British company named Bladon Jets actually supplied Jag with two micro gas turbines. Theoretically, each 77 pound turbine in the Jaguar would have been able to produce 47 horsepower. While that is not a monumental amount of power, the fact that it can be produced with so little weight is genuinely impressive, especially when considering that it does not require any other mechanical aids, such as a heavy transmission. And if that is not impressive enough, the hypercar Jag made itself for its 75th birthday is also quite eco-friendly. Because of the use of turbine jets instead of Internal combustion engines, the exhaust from the 787 horsepower hypercar was cleaner than that of a Prius. In addition to clean emissions the C-X75 has a (potential) 560 mile range, which up until recently was twice that of a Tesla Model S. As you may have guessed, because thus far there are 693 horses unaccounted for, there is another source of propulsion on the C-X75. Each wheel had its own 195 horsepower electric motor. This not only helped acceleration, but would have made the Jag phenomenal in the bends with torque vectoring all wheel drive. Using both propulsion devices in tandem, the concept was said to reach 60 in under three seconds, 100 under six, and and keep jetting on up to 205. Unfortunately, Jaguar’s Hybrid Hyper car will never break the will of the 918, or even make it to the production lines. But the C-X75 won’t stay hidden forever, it will make a big screen debut along with the DB10 on the set of Spectre when it hits theaters. Though that version will not be either of the previous iterations, it will have a ravenous 5 liter V8, but at least the body will live on… despite that being the least impressive aspect of the car.